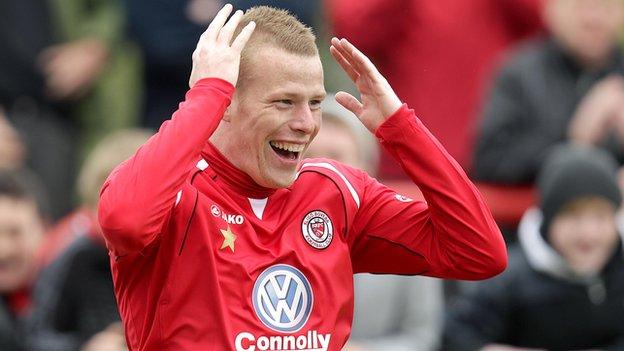 Derry's defence of the EA Sports Cup ended with a heavy defeat to Sligo in the Showgrounds quarter-final.

Raffaele Cretaro slid in a 50th minute opener and Sligo added a second after Ryan McBride was sent-off on 77.

Danny North netted from the rebound after his penalty was saved and late strikes from Cretaro and North sealed victory for the league leaders.

The teams were returning to action after the mid-season break and the hosts made a bright start, but Derry were first to threaten on 25 minutes through McLaughlin's effort.

Ferry made two saves from North and the striker rifled just over the bar before the break.

Rovers took a desreved lead when Cretaro slipped the ball under Ferry from North's throughball.

McBride was given a straight red card after bringing Cretaro down in the area and while Ferry saved North's spot-kick, the striker scored from the rebound.

Ferry was beaten by Cretaro's low shot as Sligo moved 3-0 ahead on 83 minutes and North fired home to complete his double two minutes later.