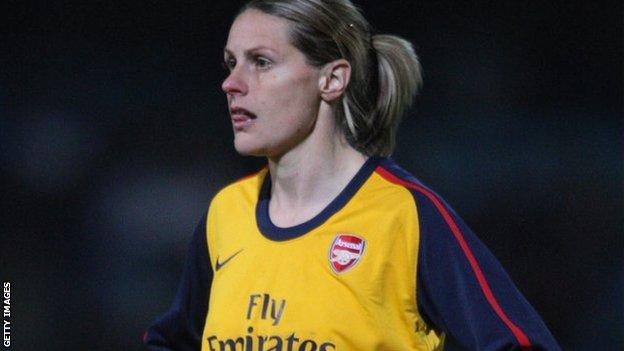 The top-of-the-table clash saw Arsenal women extend their lead with a 4-2 victory over visiting Birmingham City.

Liverpool picked up their first points of the season with a 2-0 win at Doncaster Rovers Belles that pushed their hosts to the foot of the table.

Everton drew 1-1 at Bristol Academy in the mid-table match on Saturday.

Aine O'Gorman rattled the Reds' bar, Millie Bright blazed over under pressure and Nicky Davies had to pull off a smart stop from a deflection just before the break to maintain Liverpool's advantage.

Chloe Jones hit a spectacular shot into the Belles' top corner on 47 minutes, only for the whistle to go as play was brought back for a free-kick to the visitors.

But on the hour, Katie Brusell did double the lead with another effort from distance past Mary Earps, securing the three points against a Belles' side that rarely threatened.

These two mid-table teams finished level at 1-1, not an especially surprising outcome in light of their near-identical league records.

Everton took a ninth-minute lead as keeper Siobhan Chamberlain brought down Toni Duggan in the box and Fara Williams converted the resulting penalty.

Lucy Bronze was called on to clear off the Toffees' line after Rachel Brown spilled a Jess Fishlock free-kick and the visitors were denied a second goal, with a Jody Handley effort ruled offside.

Second-half pressure from the Vixens finally told as in the 78th-minute Laura Del Rio thumped home a 20-yarder and the Spaniard saw another strike blocked seconds later.

Natasha Dowie missed a chance for a late winner for Everton, as the game ended all square.

Midway through the first half, the Gunners hit the woodwork twice in the space of seconds, first from Rachel Yankey, then via Gemma Davison with the follow-up strike.

Davison did find the net on 27 minutes however, heading home Little's corner at the far post.

Little doubled the lead five minutes later with a powerful finish, after Spencer could only parry Yankey's cross.

Any hopes of a Birmingham fightback were dashed just two minutes after the restart as Spencer fumbled in Steph Houghton's shot from distance.

Four minutes later Rachel Williams headed home a Jo Potter corner but when Jodie Taylor had the chance to further reduce the deficit, she cleared the bar.

The result was settled by the Gunners' fourth goal on 70 minutes, a Jennifer Beattie header from Little's free-kick and if that wasn't enough for the Blues, Kelly Smith immediately made her return from injury for the hosts.

With five minutes left, Taylor did pull a second goal back from long range but it was too late.

Chelsea went close first through a Dani Buet lob and then when Dunia Susi's header from a Sophie Ingle cross was turned over the top.

Lincoln's Megan Harris was inches from connecting with a Collette McCallum free-kick, while Precious Hamilton had a couple of chances before the break for the home side but dithered on a Casey Stoney delivery and then saw her shot from a Remi Allen pass well taken by Carly Telford.

Chelsea hit the bar on the hour mark from Buet's 25-yard free kick, after which Hamilton fired over at the other end from Lucy Staniforth's flick.

But the deadlock was broken on 65 minutes, when Carla Cantrell latched on to a great ball by Kathryn Rood to flick over the outrushing keeper.

Chelsea threw on striker Helen Lander for the last 15 minutes in search of an equaliser but with four minutes to go, Cantrell again broke clear from a Rood pass, to fire home her second goal via the post.