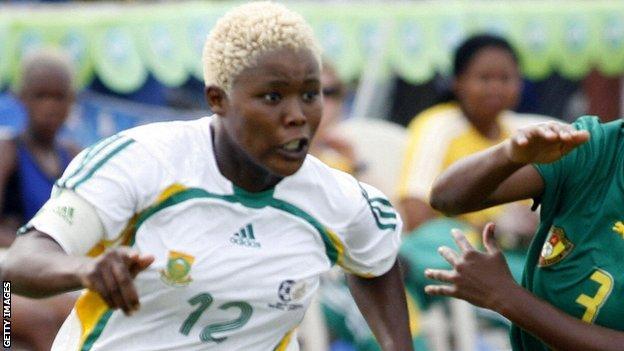 South Africa striker Portia Modise says her team could cause some shocks at next month's Olympic games in London.

The result comes a week after their 2-1 win over Zambia to ensure they qualify for the African Women's Championship later this year.

"We can surprise people because we've been having good training camps and the team is coming together," she said.

"I think we can go out there and make our mark."

The South Africans begin their first-ever Olympic campaign against Sweden on 25 July, two days before the Games opening ceremony.

They take on Canada three days later and finish with a game against Japan on 31 July.

Modise, who has scored a remarkable 71 goals in 92 appearances, says the team realise the whole continent is watching them in London.

"There's too much pressure, it's not going to be easy," she told BBC Sport.

"We're looking forward to going there and doing our best and represent the whole African continent not only South Africa and make the whole of Africa proud.

South Africa also held Nigeria to a 1-1 draw in Rustenberg three weeks ago.

Banyana Banyana will continue their preparations for the Olympics with a training camp in Germany from 3-14 July.

Cameroon will be Africa's other representatives in women's tournament and they will play Brazil, hosts Great Britain and New Zealand in Group E.