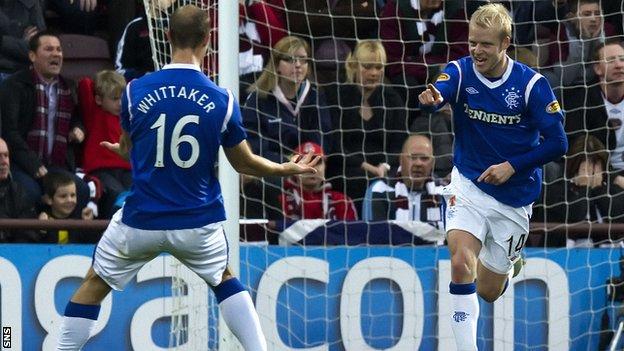 Steven Naismith and Steven Whittaker have lodged objections to their transfer from the old Rangers Football Club to the newco.

The Scotland internationals now claim to be free agents, having issued statements through their lawyers.

But the Charles Green consortium that bought Rangers' assets say they will take legal action to block the moves.

Green said his company would "seek damages for breach of contract and for inducement to break contracts".

The announcement from Naismith and Whittaker came after Sone Aluko and Rhys McCabe said they too were choosing not to switch to the new company.

"It has been an extremely difficult decision to make but I believe it is the right decision," said forward Naismith.

"As players we were put in a difficult position by the administrators whereby we were asked to take a 75% pay cut to contracts that we entered into in good faith.

"As players we collectively saw this as the only way to get Rangers Football Club out of administration by way of a CVA [company voluntary arrangement] and thereby protect the staff jobs and the history of the club and give the creditors who had also entered into contracts with Rangers in good faith the best chance of being paid.

"Both Steven and I and our agent fought hard with administrators during negotiations to insert clauses that offered protection to staff and players at the club.

"I am extremely proud of the actions we took but I am disappointed and angry that Rangers Football Club no longer exists in its original form."

The versatile Whittaker, who signed a five-year contract at Ibrox last July, told reporters: "From a football point of view, I think it's best to continue my career elsewhere.

The players involved, their agents and clubs who may be pursuing these players should be in no doubt that we will do whatever it takes to protect the club's interests

"It doesn't look like Rangers will be in the SPL and there's no European football.

"We owe no loyalty to the new club. There is no history there for us."

Naismith, 25, who suffered two long injury lay-offs during his time at Ibrox, echoed those sentiments, saying: "I'd like to think I've given my all for Rangers.

"My loyalty is with Rangers, not with Sevco [Green's company name], who I don't know anything about.

"There is too much uncertainty over what division the new company are going to be playing in at this stage of my career. I'm an ambitious footballer."

Green, however, insists that the players cannot walk away.

"The club is facing massive challenges in terms of its league status and the last thing the fans want to see is a dispute between the club and players," he said.

"The Scottish FA has been considering the issue and has issued a preliminary guidance note on registration issues. That note has made it clear that it is open to the club to challenge the actions of the players.

"Our lawyers have written to the SFA intimating that we do challenge the actions of the players and explaining why that is. They have also asked that the SFA to confirm how it proposes to resolve the dispute between the players and club.

"We have no wish to go to court on these matters but the players involved, their agents and clubs who may be pursuing these players should be in no doubt that we will do whatever it takes to protect the club's interests."

Naismith and Whittaker spoke with manager Ally McCoist before making their intentions public, with both men saying he understood their dilemma and wished them well.

"It was a nice conversation," revealed Whittaker.

Responding to the news on Aluko and McCabe, McCoist had said: "Players have their own decisions to make, and I understand that, but the question they have to ask themselves is - do they want to play for Rangers or not?

"The formation of a new company is not the issue. The players would be playing for the same club - Rangers - in front of the same fans.

"I don't want Rangers fans to be reading over the next few days how devastated players are about having to go. The fans deserve better than that. They are not daft."

McCabe, 19, broke into the first team last season, while Nigerian international Aluko's deal was due to expire this summer with an option to extend the contract.

Rangers were forced into administration in February over an unpaid tax bill and failure to secure a CVA in order to exit the process consigned the club to liquidation.

The newco Rangers has submitted an application to be granted entry into the Scottish Premier League and will face a vote by all 12 top-flight clubs on 4 July.