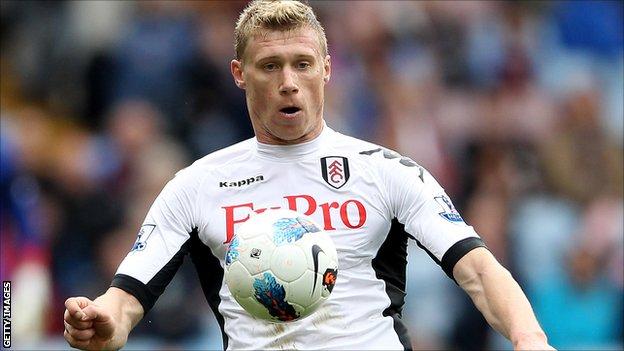 Premier League new boys Reading have completed the signing of striker Pavel Pogrebnyak, after the Russian was granted a work permit.

The 28-year-old, who has eight goals in 32 caps for Russia, has signed a four-year deal with Brian McDermott's side.

The Royals faced stiff competition from Fulham for the former Stuttgart striker, who was a free agent.

He scored six goals in 12 starts for the Cottagers last season after joining them in January.

Royals boss Brian McDermott told the club's official website: "We're delighted. It's been a long process to get Pavel to the club and now he's officially a Reading player and everyone is looking forward to working with him.

"Having met Pavel, he is a top guy, his work ethic is excellent and I'm sure he will be very important to our group in the coming years."

Director of football Nick Hammond added: "We were always hopeful that a permit would be secured but it's still great to get the deal done.

"It'll be nice get him in and working with the lads - he's a great individual, and will fit really well into group."

Pogrebnyak will receive a signing-on fee from Reading, who were recently taken over by Russian tycoon Anton Zingarevich.

But reports that Pogrebnyak is set to earn £65,000 a week are said to be well wide of the mark.

Pogrebnyak is Reading's third signing of the summer following winger Garath McCleary's arrival in May and the capture of midfielder Danny Guthrie from Newcastle United.