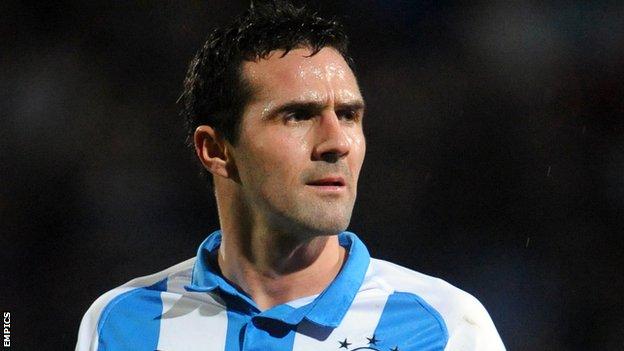 The 33-year-old midfielder signed a one-year deal with the Robins after his release by Huddersfield following their promotion to the Championship.

"There was interest from a couple of clubs, I came down to speak to Paolo and was very impressed with what he had to say," Miller told BBC Wiltshire.

"I just wanted to get the deal done as quickly as possible as did he."

Miller has a wealth of Football League experience, having scored 108 goals in 514 career appearances, and counts Hartlepool, Ipswich, Sunderland and Sheffield Wednesday among his former clubs.

The midfielder featured 33 times for Huddersfield as they won promotion from League One last season, starting the play-off final at Wembley against Sheffield United.

He is the second ex-Terriers player to join Swindon after winger Gary Roberts agreed a two-year deal earlier in the week.

"The way Paolo is talking, he wants promotion next season," Miller added. "He's not happy just to get to the next level.

"He wants to go even higher and that was one of the reasons I decided to come.

"He's got tremendous ambition and he had a taste for it last year, as did I, and I think we both share the same beliefs that you want to go to the next level."