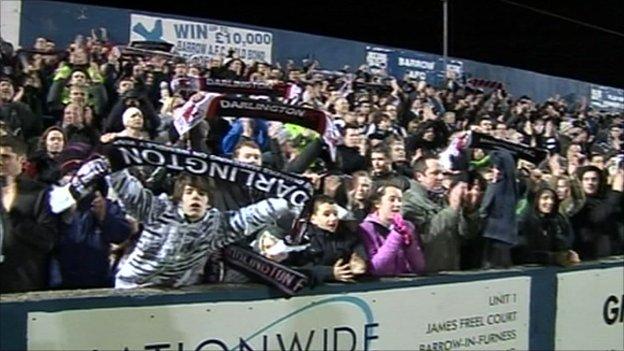 Darlington have failed in their appeal to overturn the Football Association's decision to demote the club to the Northern League.

The Quakers were relegated four divisions following the Football Conference's decision to deny entry after a breach of operational rules.

The ruling means the club will now be forced to change their name under the circumstances of the takeover.

In addition Darlington will be refused entry into the FA Cup and FA Vase.

Darlington FC were placed in administration by former chairman Raj Singh in January 2012, with DFC 1883 Ltd to save the club from liquidation and ensured it would complete the 2011-12 season.

However despite the group's efforts to acquire a Company Voluntary Arrangement to allow the club to come out of administration the bid was unsuccessful.

That failure to acquire a CVA meant the Football Conference refused DFC 1883 entry into their divisions.

In addition DFC 1883 Ltd bought assets from the football club and set up a new holding company, putting the former club into liquidation.

The FA ruled that the club be demoted to step five of the pyramid, and as the former club no longer exists would need to change their name.

"We are bitterly disappointed by the decision of the FA, we feel we had a strong case and to be honest I am gob-smacked that the appeal was unsuccessful," said Laura Drew of DFC 1883 Ltd.

"This is a position that we heavily dispute but we have to accept where we are and fight back from here.

"I am Darlington fan first and foremost and this hurts badly, but I know there is a future and we need to focus on that now."

The new club have appointed Martin Gray as the manager from Craig Liddle's decision to take up an academy post at Sunderland.

Gray, a former player and caretaker boss during the club's Football League spell will begin the campaign with a new-look squad playing at Bishop Auckland's Heritage Park ground.

"When I took this role I knew the club had been placed at level five," Gray said.

"As disappointing as this the appeal outcome is, it doesn't change the fact that we have a job to do and we will do it."