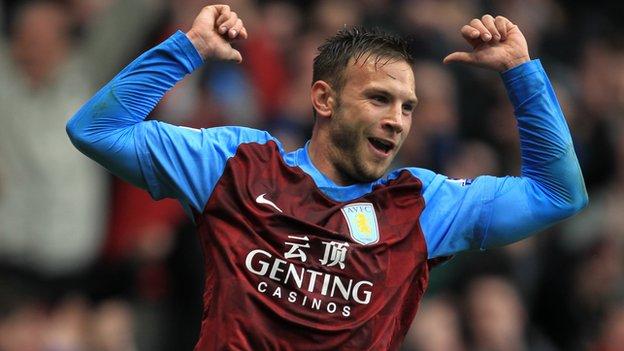 Aston Villa striker Andi Weimann hopes young players will get the same chance to impress under new manager Paul Lambert as they did under Alex McLeish.

The 20-year-old Austrian was one of the few bright spots for Villa last season, scoring two crucial goals late in the campaign which ultimately kept them up.

And Weimann hopes Lambert will prove as supportive of youth as his predecessor.

"Hopefully I get another opportunity to show what I can show and get a few more chances in the team," he said.

"Last season we had loads of young players come through.

"I've been watching Euro 2012 every day and I like to see Fernando Torres. I watch him whenever he plays. If I could get half the career he's had at Liverpool, I'd be happy

"I think seven players who had come through the academy started one game, which is good for the young players because they can see there is a chance there for them."

Admittedly, McLeish's hand was somewhat forced by injuries, the loss of record signing Darren Bent being the most glaring example.

There have been suggestions that former Norwich boss Lambert will soon be reunited with the Canaries' top scorer last term, Grant Holt.

But Weimann hopes his goals (he came off the bench to net the winner against Fulham in March before scoring at Villa Park a month later against Stoke) will not be forgotten.

"It's a fresh start for everyone and I can't wait to get going," added Weimann, whose season ended in disappointment when he injured his knee in Villa's penultimate game, the 1-1 home draw against Spurs which kept McLeish's men up.

"I started playing in the first team last season and got a taste for it. And I want to get more of it.

"Hopefully I can impress the gaffer in pre-season and get a few chances to play next season.

"But it's a clean slate for everyone. When we come back for pre-season, you know everyone's going to be giving 100% to show the manager what we can do."

Weimann is confident he will be fit for Villa's opener at West Ham on 18 August following his knee ligament injury, suffered in a freakish tangle with former Villa keeper Brad Friedel.

"It's not too bad," he said. "I had four weeks off because I had the brace on.

"Now I'm getting back into it and building up my fitness. They said it would be eight weeks which would take it to a week before the start of pre-season so if everything goes well, hopefully I should be fit.

"I started training last Monday and, at the moment, it's just been bike work and swimming, which is a great way to get your muscles working again. I'll probably know more when I start running."

In the meantime, Vienna-born Weimann has been keeping busy watching events unfold at Euro 2012, where, as befits a man he has seen score on his last two trips to Villa Park, his idol is Chelsea and Spain striker Fernando Torres.

"I've been watching it every day and I like to see Fernando Torres," he said.

"I've kept a close eye on him and he's scored two goals so far.

"I watch him whenever he plays. If I could get half the career he had at Liverpool, I'd be happy."