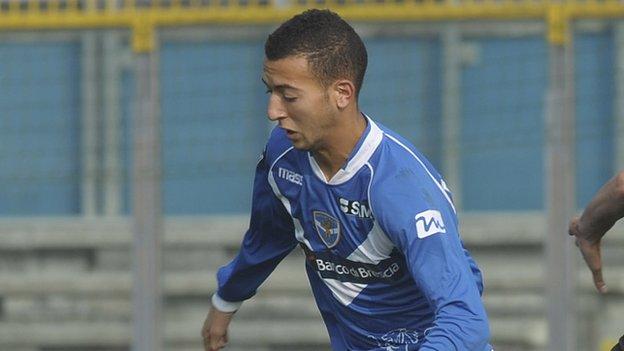 The former Belgian youth international, 21, was recently given clearance by Fifa to play for Morocco.

We are very pleased that Omar can play for Morocco

"The news has taken quite a while so he has not played one game for us, which makes it a little difficult to find out how exactly he fits in the team and what he can do for us," said Verbeek.

"I have to name my squad in two weeks - I'm still thinking about what to do."

El Kaddouri has spent the last few years with Brescia in Italy but is heavily-tipped to join champions Juventus.

Despite the speculation surrounding the midfielder, Verbeek says there is no guarantee that he will feature in his final 18-man squad.

"He's a good player - there's no doubt about that - but there is competition in his position from some very good players," the Dutchman told BBC Sport.

Verbeek, who coached Australia at the 2010 World Cup, has already sent a list of 35 players to world governing body Fifa.

Morocco, who will be appearing at their seventh Olympic tournament, open their Group D campaign against Honduras on 26 July before meeting Japan three days later and Spain on 1 August.

Despite his reticence over whether El Kaddouri will make the Olympic squad, Verbeek was in no doubt that his transfer of national allegiance is a boost for the Atlas Lions.

"We are very pleased that Omar can play for Morocco - he will be a good player for (us) in the future."

Morocco are one of four African representatives in the men's competition, joining Egypt, Gabon and Senegal in the tournament to be played across Great Britain.

Meanwhile, Africa will be represented by Cameroon and South Africa in the female tournament.