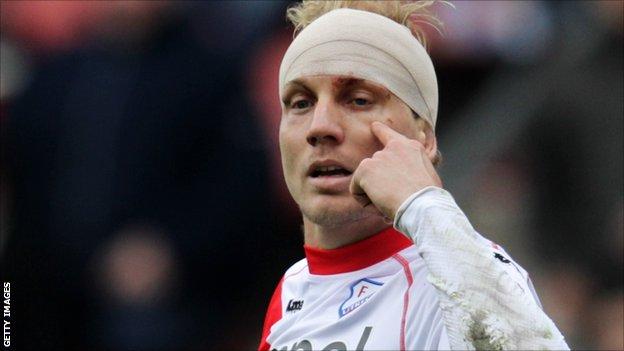 The Cherries agreed personal terms with the 29-year-old last week and have now reached an agreement with the Dutch club to sign the powerful striker.

"Frank has scored goals in a top Dutch league, he is experienced and he knows the game," Bournemouth manager Paul Groves told BBC Radio Solent.

"He has lots of good attributes that I think will help the football club progress and cause teams problems."

He can play up front on his own, he is a threat in the air and in and around the box, and he can make his own goals

Wes Thomas, Steve Fletcher, Charlie Sheringham and young striker Jayden Stockley are also on the books, with Demouge, who is yet to complete his medical, the latest addition to Bournemouth's forward unit.

Groves admitted a lot of hard work had gone into securing the signature of Demouge, who arrives on a free transfer on a two-year deal, but he believes he will be a huge success at League One Bournemouth.

"We've had to sell the ambition and we've done a lot of long, hard work behind the scenes to attract Frank to the club because he is already playing at a good level now.

"But he wants to try a different challenge, he liked the feel of the football club and the area."

Dutch-born Demouge at N.E.C Nijmegen in 2001 and spells at Eindhoven, Den Bosch and Willem II before joining Utrecht in 2010. He scored 11 goals in 46 appearances for the Dutch Eredivisie outfit.

Groves added: "He has got good awareness of people that play around him.

"He can also play up front on his own, he is a threat in the air and in and around the box, and he can make his own goals.

"He can pin people and hold the ball up, so he will cause teams problems. His character is fantastic and that was a major part in trying to get him."