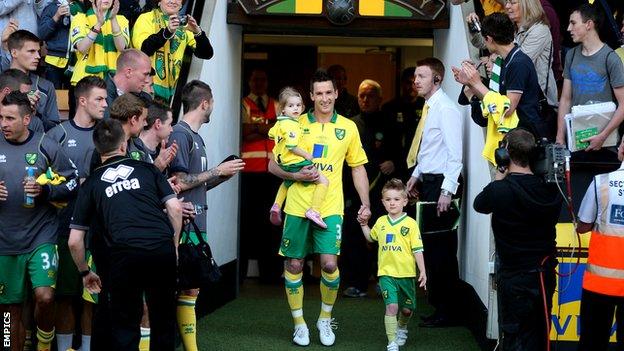 The 33-year-old left-back, who made 361 appearances for the Canaries over 11 years, is United manager Neil Warnock's second signing of the summer.

"He's a player I've looked at for many years, a very good professional," Warnock told the Leeds website.

"I tried to sign him at Sheffield United a few years back and it wasn't to be. He'll love it here."

Drury made 16 appearances for Norwich in the Premier League last season, the majority in the latter part of the campaign.

Warnock continued: "I think he's a good defender, he's quick and I thought we needed a bit of experience in certain places, and that desire and will.

"He's got the experience we need. He's better than a lot of full-backs in the Premier League.

"When you speak to him he's full of enthusiasm and when you get released from a club you want to prove people wrong.

"We've always had a rapport when my teams have played against him and I think he knows I've always respected him. You can't play with fear at Elland Road and I think Adam will enjoy that part."

City manager Chris Hughton said Drury had been an outstanding servant for Norwich.

"For a player to be at a club for 11 years and play so many games in that time is a very rare thing and a truly outstanding achievement," he added.

Norwich supporter Stephen Fry paid his own tribute to the player by posting on Twitter: "A sad and fond farewell to Adam Drury - a loyal and gifted servant to @NorwichCityFC for 11 years."

Both of Warnock's summer signings play in defence, with centre-back Jason Pearce joining from Portsmouth.