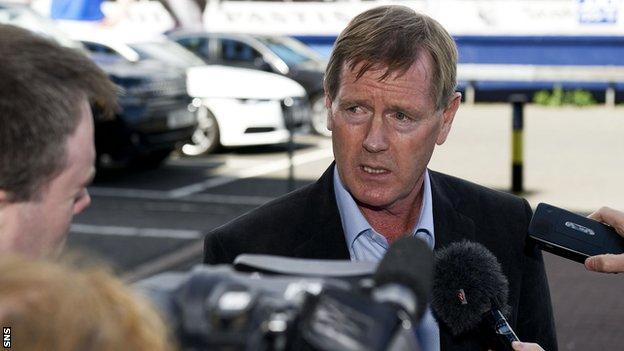 Former director Dave King believes huge cost-cutting measures will be required at a 'newco' Rangers under the stewardship of Charles Green.

King has received assurances that previous club owner Craig Whyte has nothing to do with Green's consortium.

But he fears Green, who purchased the Glasgow club's assets last week, will struggle to find the level of finances necessary to fund football at Ibrox.

Green has pledged to unearth £30m in fresh investment.

"Charles Green is the only game in town," said King, who is not planning to invest in the new regime.

"But it is going to be immensely challenging for him.

The only way to make money is to aggressively cut costs, so Rangers will survive but it won't be the Rangers in three years that it could be

"The club needs to find money and I really don't know how he's going to find it."

With Rangers failing to exit administration, they are heading for liquidation, which enabled Green to buy the club's assets for a fee of £5.5m.

If Rangers relaunch successfully as a new company they will not be able to participate in European competition for three years, which will have an impact on revenue.

Green must also wait to see if a newco is accepted into the Scottish Premier League or if they must apply for a place in the Scottish Football League.

In a proposal to potential investors in Rangers drafted before a creditors' agreement was rejected, Green listed savings of £7m on salaries as an advantage of the newco route.

And King reckons further cuts would be inevitable.

"I've looked at the business plan and I think he's going to try and run the club to make a profit," said King. "I don't think that's possible.

"I believe for Rangers to be the Rangers we all want it to be, it requires investors to subsidise losses for a number of years."

Earlier in the day, the consortium fronted by former Ibrox manager Walter Smith announced that they would no longer be pursuing a sale from Green's group and would not be collaborating with the Yorkshireman.

King was not surprised by the move.

"It's going to be impossible for Rangers to run on two different business models," he continued.

"If you've got some investors coming in who want to subsidise the club for a number of years and you have others who want to make money out of it, they are inconsistent.

"One of them must just get on with it.

"Charles has a commercial plan and he's outlined what he thinks he can do. I think some of that is ambitious.

"I believe Rangers need £30m. If the club is to go through a three-year period of wilderness, it's going to require subsidies.

"The only way to make money is to aggressively cut costs, so Rangers will survive but it won't be the Rangers in three years that it could be.

"If he raises the money, it will be fine but it's a lot of money from investors that are not yet in place.

"He owns the club but the club doesn't have any money.

"Even if you get full season ticket sales and all commercial sponsors stay on board at the same level, which will be a challenge as well, that's not enough to run the club.

"That is unless you peg it back to a level when they are competing for second and third spot and that's not the Rangers I believe in."

King was critical of Rangers administrators Duff & Phelps and their decision to contest a Scottish FA transfer embargo through the courts.

"My view has always been to take the medicine," he added. "I don't think there has been enough humility. I think Rangers have been a bit arrogant.

"But I think it is very important for Scottish football that a strong Rangers emerges again.

"And I don't think that is possible in any shape or form with a business plan that runs the club for profit."