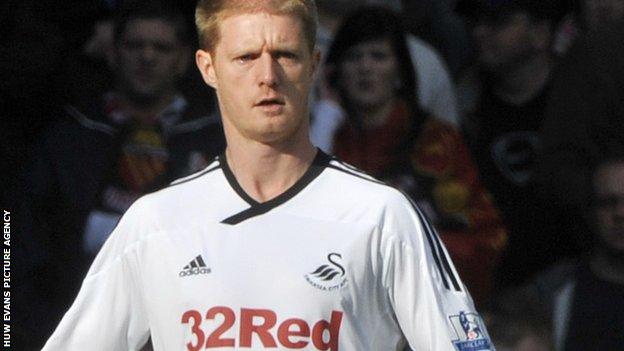 Alan Tate has warned his Swansea City team-mates against complacency, insisting the Welsh club are still not "established" as a Premier League side.

Swansea were a surprise package last season as the club finished 11th in their Premier League debut campaign.

The Swans start the new season with a new manager as former Barcelona and Real Madrid star Michael Laudrup has replaced the departed Brendan Rodgers.

"You have to aim to stay in the league," said Swans vice-captain Tate.

"And start to establish yourself as a Premier League team. You are not that after one season in the league."

But he insisted: "I don't think there is any such thing as second-season syndrome.

"People said that when we got promoted to League One and said it again when we got to the Championship.

"It hasn't happened in the past, so why should it be any different now. We won't approach it any differently and we will try to win every game.

Tate is about to start his 11th season at Swansea as he arrived at the club in 2002 when it was still in League Two.

The 29-year-old has played a key role in their rise to the top-flight and Tate believes the managerial appointment of Laudrup, who has replaced Rodgers following his move to Liverpool, has caused genuine excitement at the Liberty Stadium.

Former Denmark international Laudrup, the ex-Real Mallorca, Getafe and Spartak Moscow manager, will be unveiled as Swansea boss on Thursday.

And Tate feels the Swansea squad must have to prove themselves again to establish themselves in the starting line-up under the new regime.

"It's an exciting appointment," said the former Manchester United trainee.

"He has a decent record at Getafe and Mallorca so it's something everybody is looking forward to.

"Everyone knows how he was as a player, one of the best players who has ever lived, it is exciting for everyone.

"It will be a blank canvass again for everyone. It's a case of proving yourself all over again."