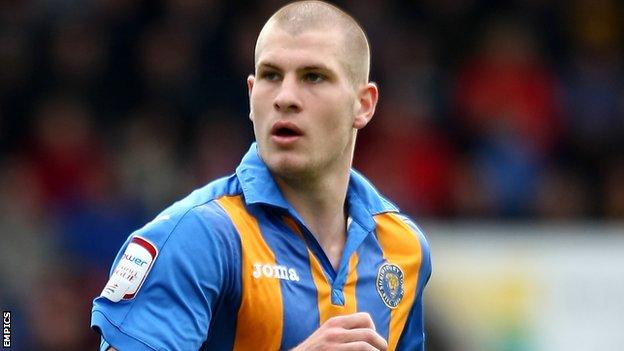 James Collins has revealed he was close to joining Coventry until delays in the move meant he chose Swindon instead.

The 21-year-old also attracted interest from Watford and Sheffield United after turning down a new deal at Shrewsbury, but opted instead to join the Robins.

The striker told BBC Wiltshire: "Coventry's my hometown and it would have been a honour to play for them.

"But we know they're in embargo difficulties and once I met with Paolo [Di Canio] I didn't want to wait."

Collins had caught the eye of clubs in higher divisions after scoring 16 goals to help Shrewsbury secure automatic promotion to League One last season.

Despite a contract offer from Shrews boss Graham Turner, Collins decided to end his 18-month association with the club.

Who is James Collins?

Although temped by a move to the Ricoh Arena, Collins decided to commit to Swindon on a two-year deal and the former Aston Villa trainee admits the influence of manager Di Canio swayed his decision.

"He sold the club to me in the way he wants to do things - he just wants to be the best, and working under him I can be the best I can be," said the Republic of Ireland U21 international.

"He said to me he's a League One manager now but he wants to be the best in the league.

"I'm an ambitious person and I want back-to-back promotions and I feel with backing like that we've got as good a chance as any of going up.

"I'm confident I can score goals in any league and this year, with better players and more competition, it will push me to get more goals.

Meanwhile, Swindon have announced they will play a pre-season friendly against Bayern Munich II.

The match will take place on Wednesday, 11 July, during the club's two week tour of Italy.