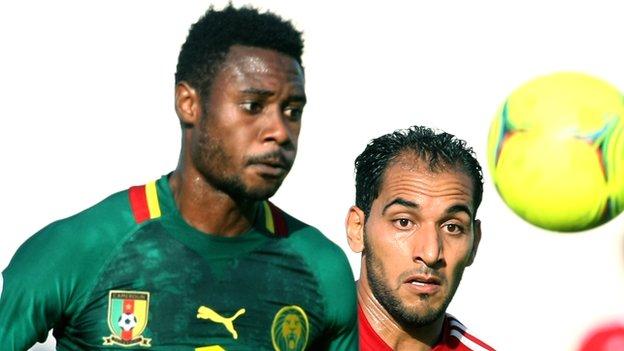 Cameroon coach Denis Lavagne says his side is 'getting better' despite Saturday's tight Africa Cup of Nations qualifying win over Guinea-Bissau.

Playing a team ranked below Afghanistan by Fifa, the four-time African champions took 80 minutes to open the scoring in a 1-0 win.

"There are still things to improve," said the French coach.

"We're still lacking a bit of quality up front, particularly with the final ball, but we're getting better."

It's a new group with some young players up front - and they need to learn, work and play together to develop understanding

"We are on the right path."

Many Indomitable Lions fans would disagree, in a month where Cameroon lost to Libya in a 2014 World Cup qualifier before the disappointing defeat of Guinea-Bissau.

Lavagne's side started the month with a 1-0 defeat of DR Congo in World Cup qualifying but the last-gasp 2-1 defeat by Libya has left Cameroon third in Group I after just two rounds.

Fans had demanded an improvement after the defeat by Libya, a game that was played on neutral territory in Tunisia, but the 2-0 aggregate win over Guinea-Bissau failed to convince.

Nonetheless, the Cameroon coach said his team was evolving after the narrowest of wins against a team ranked over 100 places below the Indomitable Lions by Fifa.

"It's going to take a bit of time with this team," he said.

"It's a new group with some young players up front - and they need to learn, work and play together to develop understanding.

"We can be satisfied with the spirit the boys have shown during the three matches.

"Throughout 90 minutes, Guinea-Bissau did not have one shot on target.

"Even against Libya, we played a quality match although our efforts went unrewarded as we conceded from a corner in the dying minutes."

Cameroon, a team that became the first African team to reach the World Cup quarter-finals in 1990, has been hit by numerous problems in recent years.

Late last year, a decision by the players to boycott a friendly in Algeria because of a bonus row with the federation led to an eight-month ban for Samuel Eto'o.

The four-time African Footballer of the Year will be available to play when the third and final round of Nations Cup qualifying takes place in September and October.

The Indomitable Lions failed to qualify for this year's Nations Cup, which took place in neighbouring countries Equatorial Guinea and Gabon.