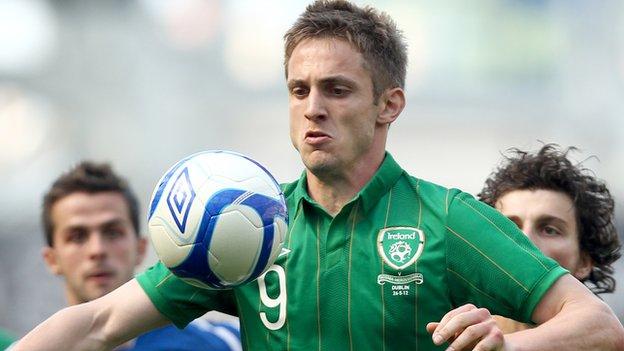 Kevin Doyle replaces Simon Cox in the only change to the Republic of Ireland team for their final Euro 2012 game against Italy in Poznan.

Doyle played in the opening 3-1 defeat by Croatia but Cox came in for the 4-0 loss to Spain.

Damien Duff will captain the side to mark his 100th international cap.

"It's obviously an awfully proud moment, but I would take three points ahead of 100 caps at the minute," said the Fulham winger.

It's a feat, but at the minute, I just want to get a good performance and a good result

The 33-year-old has been handed the armband by usual skipper Robbie Keane to mark the achievement of becoming just the fifth man to complete a century for the country.

He added: "I know how much it means to myself and my family and what have you, but I am not trying to make a big deal out of it.

"I just want to get on with the game and hopefully do the business.

"It's something that I will probably look back on maybe next week, maybe next year.

"It's a feat, but at the minute, I just want to get a good performance and a good result."

The post mortem on Ireland's showing in Poland is already under way and there has been soul-searching within the camp since Thursday night's humbling by world and European champions Spain.

Duff said: "What went wrong in this tournament? I don't know, I suppose you can just say we weren't good enough when it came to the crunch.

"They are two very disappointing results and we are looking to restore a bit of pride."