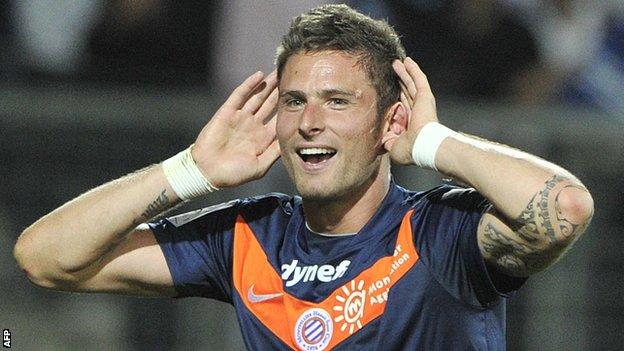 Arsenal have agreed a deal to sign Montpellier striker and France international Olivier Giroud for £12m.

He will have a medical and paperwork will be completed after Euro 2012.

Giroud was playing in French's Ligue 2 as recently as 2010, and only made his international debut last November at the age of 25.

The 6ft 3in forward, who was an unused substitute in France's 1-1 Euro 2012 draw with England, scored 21 goals in his club's run to the Ligue 1 title.

Giroud is one of only two recognised strikers in the French squad, alongside Karim Benzema. He has six caps for his country and one goal.

Earlier this week, Montpellier manager Rene Girard told French radio station RMC that Wenger was leading a chase of top sides for the striker, who became his club's record transfer two years ago when he cost them £1.7m.

"Arsenal are very interested and Giroud wants to play in England. If Arsene agrees with the president, he will sign for them," he said.