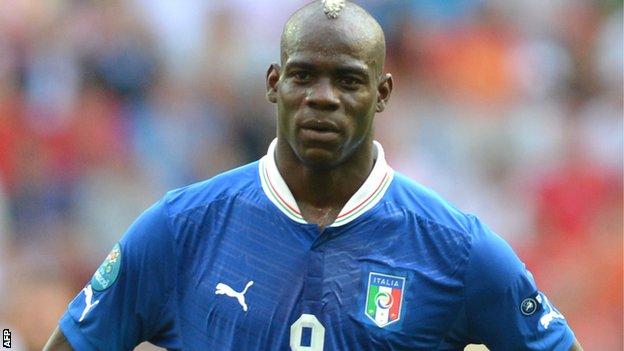 Uefa is to investigate alleged racist chanting during the Euro 2012 matches between Spain and Italy and Russia v Czech Republic.

A Spanish fans' group has said some of its supporters abused Manchester City and Italy striker Mario Balotelli.

Uefa said that no disciplinary proceedings had been started at this stage.

The Uefa statement added: "Following the provision of new independent information today, regarding the two cases of alleged racist chanting in the Spain-Italy and Russia-Czech Republic matches, Uefa is now conducting further investigations."

No official complaints have been made to Uefa by Italy or Czech Republic.

The admission by a Spanish fans' group that some of their supporters racially abused Balotelli during Sunday's game was sent to Uefa by an anti-racism network.

Piara Powar, the chief executive of the Football Against Racism in Europe (Fare) network, told BBC Sport that the statement, along with testimony from photographers at the game given to the Daily Mirror, has been handed to Uefa.

"Eye witness accounts like this are very important," he said.

"It adds to the Daily Mirror account. And it gives Uefa something to go on when they look at this.

"Fare monitors didn't hear the abuse. We only have two observers in each stadium. And it hadn't come to the attention of Uefa's own officials at the game."

Thomas Herzog, spokesman for the Football Supporters Europe Fans' Embassy team for Spanish supporters, said in a statement that around "200 supporters started monkey chants when the Italian player Mario Balotelli touched the ball".

He added: "We're glad to report that the majority of Spanish supporters reacted in a very positive way, because many of them tried to intervene very quickly and stop the fans in question from singing.

"We are clearly angry about this small section of Spanish supporters showing this kind of racist behaviour. But we have to stress that most of the Spanish supporters inside the stand were very aware of this issue and tried their best to intervene."

Powar believes Uefa needs to take action over racist incidents within Euro 2012 if the evidence is presented to them.

"When it comes to tournament situations it's important to see proper sanctions taken so that the message can be given to the world," he said.

"So it's good to hear Spanish fans taking this action and self-policing."

Cesare Prandelli, head coach for Italy, told BBC Sport on Monday that "no incident had taken place" with regard to Balotelli during the Spain game.

The same day Uefa wrote to the mayors of Polish and Ukrainian cities hosting Euro 2012 training sessions to ask for an increased police presence to avoid racist behaviour from fans.

Some members of the Netherlands squad complained of hearing monkey noises at an open training session at Wisla Krakow's stadium last week when thousands of people turned up to watch.