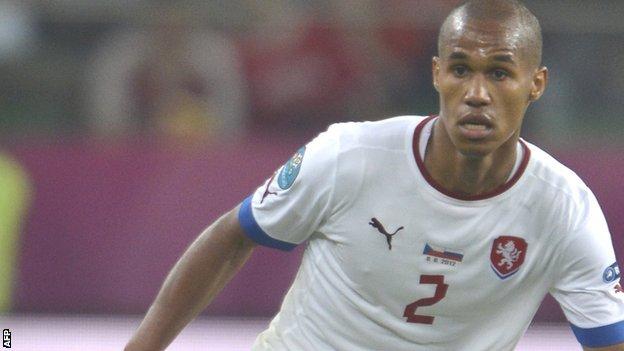 Uefa has begun disciplinary proceedings against the Football Union of Russia for "improper conduct of supporters" during Friday's Euro 2012 game against the Czech Republic in Wroclaw.

Four stewards needed hospital treatment after being attacked by fans in the Municipal Stadium in Poland.

And claims of racist abuse directed at Czech defender Theodor Gebre Selassie, who is black, are being investigated.

The Control and Disciplinary Body will review the case on Wednesday, 13 June.

A Uefa statement read: "Having looked at the security reports and available images, Uefa has today announced that disciplinary proceedings have been opened against the Football Union of Russia [RFS] for the improper conduct of its supporters, the setting off and throwing of fireworks, and the display of illicit banners at Friday's Uefa match."

There was a brief and isolated incident involving a small group of around 30 fans who attacked a handful of stewards...The local police are aware of the incident and investigating

The Fare [Football Against Racism in Europe] network confirmed one of their observers at the match heard "fleeting" racist abuse of Gebre Selassie.

"It was directed at the Czech Republic's only black player," Powar said.

Footage of the incident involving the stewards has emerged online, with Uefa releasing a statement saying they are aware of "a brief and isolated incident involving a small group of around 30 fans who attacked a handful of stewards".

The statement continued: "The situation was quickly and efficiently brought under control. The local police are aware of the incident and investigating.

"The cause of the incident is not currently known but we are studying the security reports and available images. Uefa remains entirely committed to the safety and security of all fans and spectators at all matches of Euro 2012."

The tournament has already been beset with problems of racism, with Uefa confirming on Friday there were "isolated incidents of racist chanting" aimed at Netherlands players during an open training session.