Spain made history in magical fashion as they outclassed Italy and claimed a successive European crown to add to their 2010 World Cup triumph.

Vicente del Bosque's side staged a compelling claim to be the greatest international side of all time as the Euro 2012 final was transformed into an exhibition with Italy - who performed creditably for long periods - passed brutally into submission.

"We've seen a masterclass today. Spain have been the best team in the world for the last four or five years. They deserved it tonight again, even with 11 v 11. Italy gave a lot of effort, but unfortunately they'd played too many hard games. They felt the pace and Spain, with that superior technique and movement and talent on the ball have run out easy winners. The Spanish have been criticised but they are the best team in the world without a shadow of a doubt."

The scoreline was emphatic at the conclusion but Italy performed with great resolve. Once they were reduced to 10 men after losing third substitute Thiago Motta to injury, however, they were ruthlessly exposed by masters of the passing art.

Fernando Torres emerged as a late substitute to make a powerful impact; steering home Spain's third then setting up Chelsea team-mate Juan Mata to inflict the final wound on a bedraggled Italy.

Spain's virtuoso performance was a decisive answer to a growing band of critics who had forced coach Del Bosque and his players to defend themselves against allegations that they had been "boring" throughout Euro 2012 at the pre-match media conference.

And even Arsenal manager Arsene Wenger, in an ill-timed contribution, wrote that Spain "have betrayed their philosophy and turned it into something more negative".

Not on this night.

Every quality that has led to them dominating world football since they won Euro 2008 and the World Cup in South Africa two years later was brought to bear.

It was a heartbreaking night for Italy and coach Cesare Prandelli but there was no shame in being beaten by a team of such quality. They can reflect with satisfaction on their work before this chastening evening.

Spain, perhaps stung by the words of criticism aimed in their direction, started with a pace and tempo of passing that the Italians found impossible to live with. 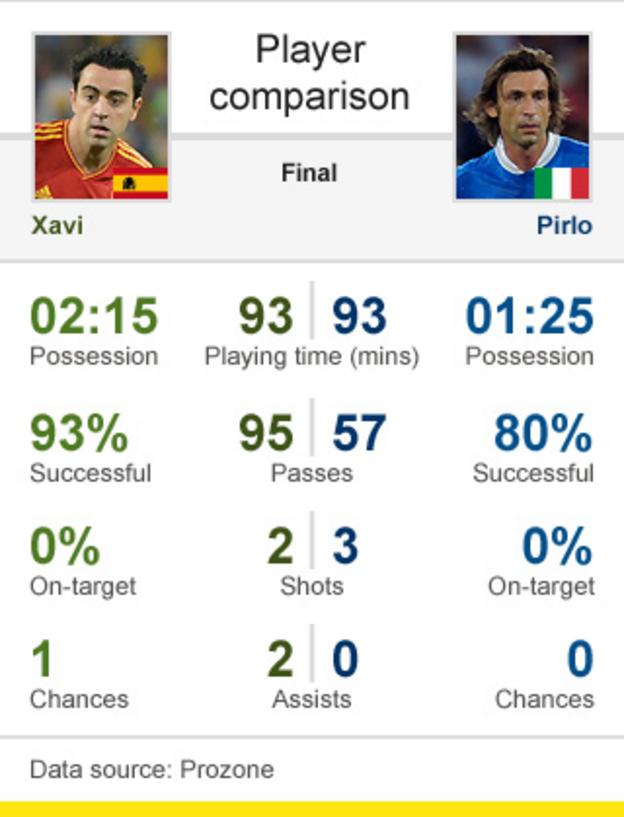 The warning signs were posted for Italy when a long spell of possession ended with Xavi shooting just over - but it was not long before they were ahead.

Cesc Fabregas was employed in the so-called "False Nine" role as Del Bosque played without a conventional striker. The former Arsenal star proved the tactic is a positive force rather than a negative one.

It was Chiellini's final contribution as he swiftly succumbed to the thigh injury that has been troubling him in the later stages of the tournament and was replaced by Federico Balzaretti.

Italy's response to Silva's goal and the early Spanish onslaught was commendable as Antonio Cassano twice had shots saved by keeper Iker Casillas but a goal of brilliance in creation and execution made their task mountainous.

Alba demonstrated exactly why Barcelona were so keen to bring the graduate of their famous La Masia youth academy back to the Nou Camp from Valencia when he finished a blurring run on to Xavi's perfect pass with a composed finish past Buffon.

Prandelli acted during the interval, sending on Antonio Di Natale for Cassano. Twice he almost got the goal that could have halted Spain, heading just over before bringing a fine save out of Casillas.

Italy's third and final change came when Motta replaced Riccardo Montolivo but Italy's luck was summed up when he suffered a hamstring injury within minutes and the Azzurri were reduced to 10 men.

Spain were now winning with something to spare and Del Bosque took the opportunity to remove the outstanding Fabregas and introduce Chelsea striker Torres for the closing stages.

It was an opportunity he took, adding the final flourishes by steering home Spain's third and unselfishly setting up Mata's finish to round off a spectacular performance.