Mario Balotelli secured Italy a place in the Euro 2012 final against Spain as his goals downed Germany in Warsaw.

Manchester City's enigmatic striker provided Italy with the cutting edge and two first-half goals as Joachim Loew's Germany failed to produce the impressive form that had seen them touted as potential tournament winners.

"The future for Germany lies within that team, but tonight you could clearly see they hit the wall. They were outplayed by Italy in the first half and Italy produced a magnificent display in the second half. Italy get all the credit tonight, they were deserved winners. As a whole team Germany couldn't match up with Italy, they lost all the battles in midfield. They couldn't control Pirlo, they couldn't control Montolivo, they couldn't control De Rossi. And on nights like this you need a star and tonight Balotelli was that man."

Balotelli put Italy on the way when he directed Antonio Cassano's cross past Germany keeper Manuel Neuer then added a thunderous second from Riccardo Montolivo's pass.

Mesut Ozil's injury-time penalty provided the briefest anxiety for Italy, whose victory was confirmed moments later, and Balotelli fell into the warm embrace of his mother as he made his way down the tunnel.

The 21-year-old limped off with cramp late on - but his work was done and Italy can now look forward to a meeting with world and European champions Spain in Kiev on Sunday.

Italy's victory maintained their stranglehold on Germany - they are undefeated in eight competitive encounters that take in five matches at the World Cup and three in the European Championship.

And the scale of Italy's achievement is the greater for the fact that Germany had an additional 48 hours to prepare while Cesare Prandelli's side were going through after extra-time and penalties against England.

Balotelli, along with the pass master Andrea Pirlo, was the inspiration but Italy's defenders and goalkeeper Gianluigi Buffon provided defiance and quality as Germany threatened in the first half then attempted to mount a recovery after the break.

Germany coach Loew responded to Pirlo's master class against England by detailing the recalled Toni Kroos to monitor the veteran. The ploy was not a success.

Buffon and his German counterpart Neuer had greeted each other warmly in the tunnel before kick-off in a prelude to a busy first 45 minutes for the pair.

"For a man who often plays in a state of chaos, Balotelli was cold and measured as he joined his colleagues in terrorising Germany's defence."

Buffon was grateful Pirlo was well placed to clear Mats Hummels' effort off the line and also needed to be alert to deal with Jerome Boateng's dangerous cross, which almost deflected in off Andrea Barzagli, as well as a shot from Kroos.

Italy edged their way into the game as Neuer saved from Montolivo and they capitalised on the spell of pressure when Balotelli headed them in front after 20 minutes. Cassano was the creator as he escaped Hummels and crossed perfectly for Balotelli, who lost Holger Badstuber to head past Neuer.

Germany's slack defending was in sharp contrast to their attacking and Buffon was again called into action to save from Ozil and Sami Khedira before Balotelli provided another demonstration of the talent that makes him such a compelling footballer and personality.

Montolivo's pass exposed Germany, leaving Balotelli to take a touch before drilling a magnificent finish high past the helpless Neuer - although by stripping off his shirt in celebration he received a needless booking from French referee Stephane Lannoy. 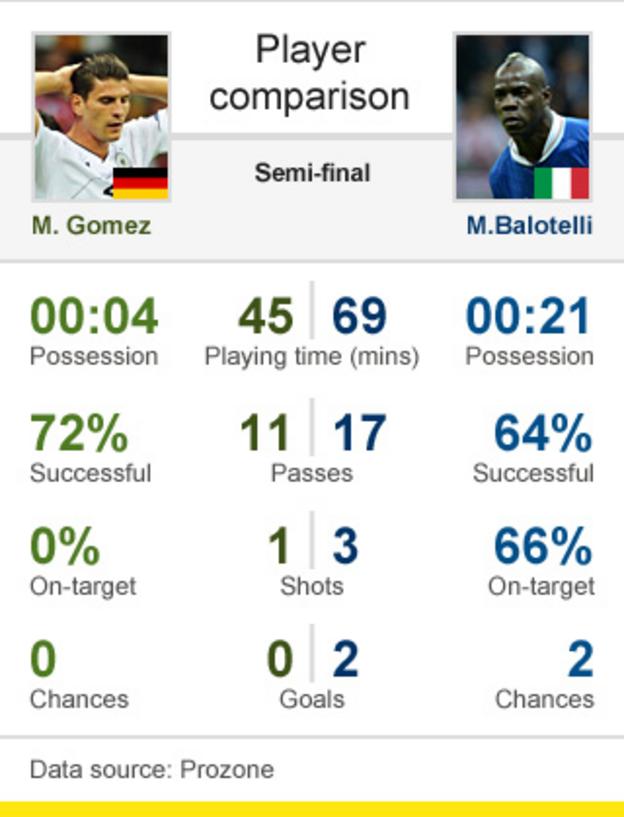 Germany required emergency action and Loew took it at the start of the second half when he replaced the anonymous Lukas Podolski - watched by his new club manager at Arsenal Arsene Wenger - and Mario Gomez with Miroslav Klose and Marco Reus.

A German response was to be expected and captain Philipp Lahm almost provided it, only to waste a presentable opportunity by firing off target - bringing a reaction from Prandelli as he removed Cassano and sent on Alessandro Diamanti.

Reus almost provided what Loew was looking for just after the hour but once again Buffon showed great athleticism to turn his free-kick on to the bar.

Claudio Marchisio was guilty of squandering the chance to wrap things up for Italy before Balotelli's night ended prematurely with 20 minutes left, making way for Antonio di Natale.

Another spell of slick passing, inevitably, involving Pirlo, played Marchisio in again but he flashed a low, angled effort beyond Neuer but also the far post.

Germany, backed by magnificent vocal support, thought they had a late lifeline when Ozil scored from the spot after Federico Balzaretti's handball - but nothing could stop Italy and Balotelli's night of triumph.