England suffered penalty agony once more as Italy won a shoot-out after the Euro 2012 quarter-final finished goalless in Kiev.

Italy were vastly superior to England over the course of 120 minutes - but the resilience and organisation that have swiftly become the trademark under new manager Roy Hodgson took an enthralling game to penalties.

And, as on five of the previous six occasions England have entered this sudden-death environment, they were left heartbroken, with Italy confirming a semi-final meeting with Germany in Warsaw on Thursday.

England captain Steven Gerrard and Wayne Rooney were successful from the spot, but Ashley Young struck the bar and Ashley Cole's effort was saved by Italy keeper Gianluigi Buffon.

"Italy were far superior to England. What impressed me was technically they controlled the game, but also they were physically stronger. That surprised me, and they deserved to get into the semis where they will expect a good clash with Germany. I had hopes for England but to be honest they didn't deserve it because they could not keep tempo with Italy, they didn't close down spaces and it was too big a mountain to climb."

England cannot complain that the better team did not emerge as winners - but even in the face of a constant wave of Italian attacks Hodgson's men still showed enough heart and durability to make their Euro 2012 exit with pride.

As Italy subjected them to what was almost torture by possession, England's back four and goalkeeper Joe Hart responded magnificently by erecting a wall of defiance, with John Terry outstanding.

England will head for home on Monday after a campaign they can reflect on with a measure of satisfaction despite the disappointment. Hodgson - at short notice - marshalled his forces effectively but the gulf in class with Italy was clear and his team looked jaded long before the end.

Hodgson will now take stock of events in Ukraine, where England drew with France and won against Sweden and Ukraine to top Group D, as he plots the qualifying campaign for the 2014 World Cup in Brazil.

Hodgson picked England's first unchanged team since the miserable last-16 encounter with Germany at the 2010 World Cup in South Africa - a show of faith in the side that beat Ukraine in Donetsk.

England were almost given the worst possible start when, after a prolonged period of possession, De Rossi's swerving left-foot volley hit the post with Hart stretching in vain to make contact.

If this was an ominous start for England, they responded with an opportunity of their own when Glen Johnson found space in the area but could not get sufficient power in his shot and Buffon was able to claw the ball away.

England's opening spell had been their best of Euro 2012. It was almost capped with a goal in the 13th minute when the dangerous Johnson crossed for Rooney but he could only glance a header over the top.

Balotelli had been his usual combination of threat mixed with moments of infuriating slackness. He was slow to react to the peerless Pirlo's pass and allowed Terry to make a fine recovering tackle, then forced his Manchester City team-mate Hart into a save from a low effort.

England had lost the measure of control they had exerted for a spell, but there was still much to encourage Hodgson, particularly when Rooney opened up Italy's defence and Danny Welbeck should have done better than sidefoot wide from the edge of the area.

Balotelli was again involved as he closed in on Antonio Cassano's header six yards out but was left hacking at the post in frustration as Terry and Joleon Lescott combined to clear. 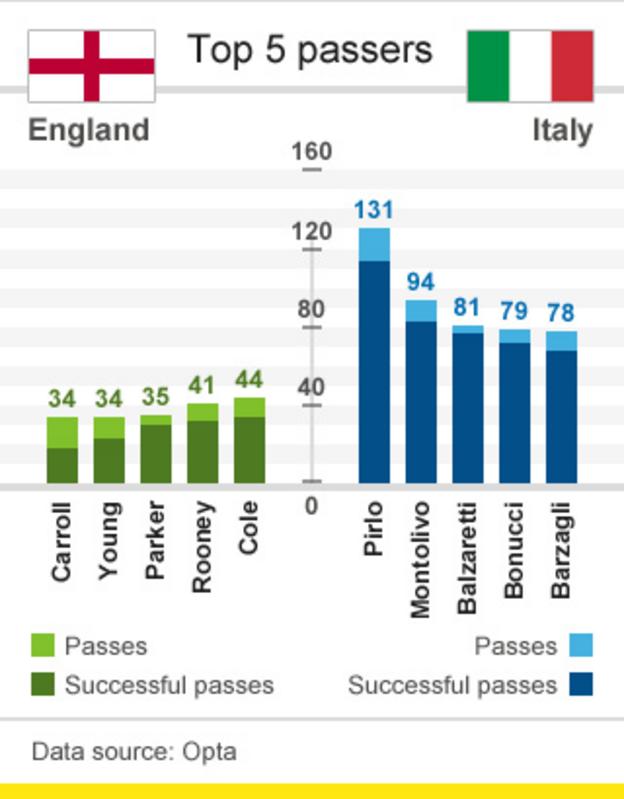 Italy continued to control possession after the break and England were fortunate to survive a chaotic incident in which Hart saved from De Rossi and Balotelli before Montolivo diverted the rebound over the bar.

Hodgson knew he needed to shift the momentum away from Italy and he chose to try to do it with a double substitution on the hour, replacing Welbeck and James Milner with Andy Carroll and Theo Walcott.

Both were involved as England managed to unsettle Italy, only for Young's close-range effort to be deflected following muscular work from Carroll.

Italy coach Cesare Prandelli introduced Diamanti in an attempt to pierce England's stubborn resistance and he swiftly forced Hart into a smart save.

The game continued to absorb into the closing seconds of normal time as Johnson produced a crucial block to stop Italian substitute Nocerino, while Rooney almost stole the win for England with an overhead kick at the other end.

England made a quick change in extra time as Jordan Henderson replaced Scott Parker but Italy still held the initiative, with Diamanti's attempted cross bouncing of the upright to safety.

Nocerino then had the ball in the net with a header as penalties loomed, but it was rightly ruled out for offside.

So it went to penalties - and a familiar tale of woe as England were again the victims of this cruellest form of defeat.