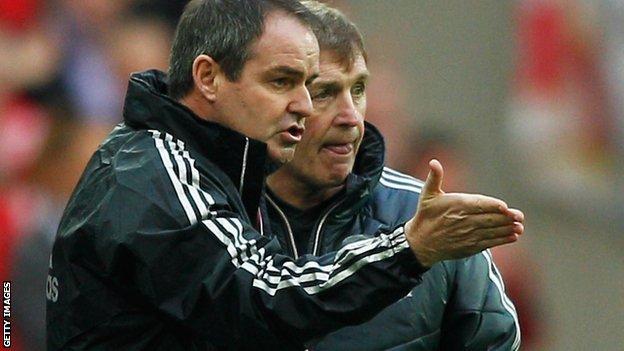 Steve Clarke will be appointed head coach at West Bromwich Albion within the next 24 hours.

The 48-year-old left his role at Liverpool on Wednesday, where he was assistant manager before Kenny Dalglish's dismissal in May.

It will be Clarke's first job as head coach after spells on the backroom staff at Newcastle, Chelsea, West Ham and Liverpool.

The former Chelsea assistant had emerged as a leading contender for the West Brom job after his depature from Anfield was confirmed by the League Managers' Association (LMA).

Former Chelsea manager Ranieri, 60, had talks before the Italian was appointed Monaco coach on a two-year contract in May.

Ex-Schalke coach Rangnick, 53, also had discussions with a view to taking over at The Hawthorns, while Hughton has been strongly linked with Norwich following Paul Lambert's appointment as Aston Villa manager.

Clarke parted company with Liverpool on "amicable terms", the LMA confirmed on Wednesday.

Clarke, who was number two to Dalglish, offered his resignation when Dalglish was sacked, but the club rejected it.

He was Dalglish's first major appointment in January 2011, arriving at Anfield after coaching spells at Newcastle, Chelsea and West Ham.

The LMA said that Clarke, who played over 400 games for Chelsea during an 11-year career with the Londoners, was now "looking forward to the next challenge in his career".

It was Hodgson's departure from Liverpool that led to Clarke moving to Anfield alongside Dalglish.

Among his first tasks will be to try and make goalkeeper Ben Foster's loan move from Birmingham a permanent one, although he is also a target for QPR.

Central defender Jonas Olsson, currently part of Sweden's Euro 2012 squad, also has only a year left of his current deal.