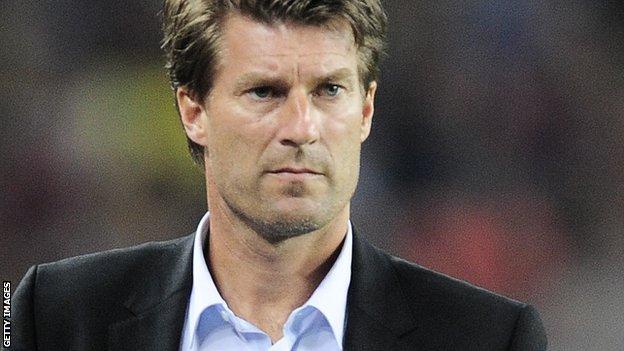 Michael Laudrup has been appointed the new Swansea City manager on a two-year contract.

Laudrup, who has previous managerial experience at Brondby, Getafe, Spartak Moscow and Real Mallorca, is Swansea's third manager in the past four years.

"I've spoken to the chairman and I'm very pleased to sign for Swansea City," he was quoted on the club's website.

"It's going to be a new experience for me and I'm really looking forward to it."

Laudrup, whose appointment came on his 48th birthday, completed negotiations with the Premier League club on Friday and is expected to arrive in south Wales on Thursday.

His assistants will be confirmed at a later date.

"I've spoken to many people about Swansea and watched a number of their games on DVD - with many more to watch," he added.

"Everyone knows the style of football Swansea play and it suits my way of thinking.''

Laudrup's style is in keeping with the playing philosophy that Swans chairman Huw Jenkins is keen to retain.

Swansea, who finished 11th in their debut Premier League season, have been without a manager since Rodgers accepted the Liverpool vacancy in May.

Jenkins said Laudrup has a "clear picture" of the club's needs and aspirations as they aim to build on last season's success.

"There is no doubt about his standing as one of the game's greatest footballers, but we also see the qualities he has as a manager," said Jenkins.

"I'm confident that Michael will prove a fantastic acquisition that will help keep this football club moving forward.''

Blackpool boss Ian Holloway was the other leading candidate for the role, although the Seasiders denied receiving any approach for the 49-year-old.

Laudrup, who won five Spanish league titles with Barcelona and Real Madrid as a player between 1991 and 1995, played a style of attractive, passing football that has been replicated by Swansea.

He has been out of work since resigning as Mallorca manager, where he was in charge for 14 months, in September 2011 after the club sacked his assistant Erik Larsen.

Laudrup retired from playing while at Dutch giants Ajax and started his coaching career aged 36 as Denmark coach Morten Olsen's assistant in 2000.

He helped inspire the Danish team to win their 2002 World Cup pool, which included Uruguay, Senegal and reigning champions France, before they were beaten 3-0 by England in Niigata.

Laudrup took the manager's job at Danish side Brondby after the World Cup in South Korea and Japan and he guided the side to the 2005 league and cup double with a young squad playing an attractive short-passing game, similar to Swansea's brand.

He was linked with a managerial vacancy at former club Real Madrid when he left Brondby in 2006 before Laudrup joined Spanish side Getafe, who he guided to the 2008 Spanish Cup final and the Uefa Cup quarter-final.

Laudrup was reportedly a contender for jobs at Valencia, Benfica, Chelsea, Blackburn Rovers and West Ham United when he resigned as Getafe boss in May 2008 but took over at Spartak Moscow that September.

Michael Laudrup is a stylish man and the football he wants his teams to play is as elegant as he was as a footballer. Laudrup was that false number nine that paved the way for the position Messi plays. He's very articulate and gets his ideas across very well.

He was dismissed seven months later following their Russian Cup loss to Dynamo Moscow and was heavily linked with Spanish side Atletico Madrid but Laudrup and the club were unable to agree terms.

He was appointed Mallorca manager in July 2010 and kept a struggling team in Spain's La Liga but left the club citing frustration in his working relationship with director of football Lorenzo Serra Ferrer.

Swansea chairman Jenkins has a reputation for appointing and developing young managers who share his football philosophy to ensure squad stability.

The subsequent departures of Martinez to Wigan,Paulo Sousa to Leicester and Rodgers to Liverpool have earned Swansea almost £10m in total compensation.