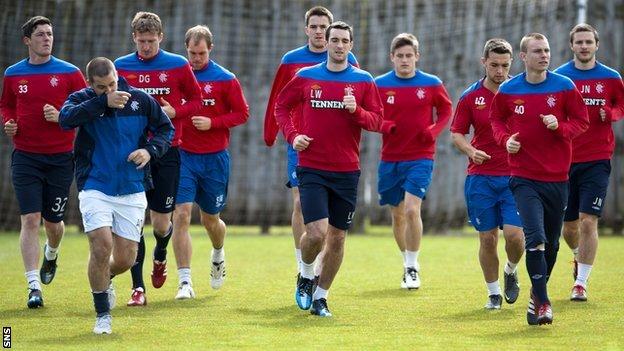 Rangers' top players will be available on cut-price deals from Friday under clauses in their contracts, as they revert to their full salaries.

The squad agreed to cuts of up to 75% at the beginning of March, as administrators Duff & Phelps sought to avoid sweeping redundancies.

It means players like Steven Naismith, one of Rangers' prize assets, could be sold for £2m.

Others who have similar clauses include Steven Whittaker (around £850,000) and team captain Steve Davis, who would be available for in the region of £1.65m.

Rangers manager Ally McCoist has voiced his desire to hold on to his key players, though the decision is likely to be taken out of his hands.

Prospective owner Charles Green's plans for the squad are unclear, but any revenue from player sales, under Duff & Phelps' proposal of a company voluntary arrangement, would go to the company for the benefit of Green's Sevco takeover vehicle, rather than to creditors.

Only money already owed to the club for previous transfers will go into the creditors' pot through the CVA.

While any bids matching the players' clauses must automatically be accepted, it does not follow that the player will necessarily leave Rangers.

It gives them the right to speak to a bidding club, but it remains possible the players involved could stay with the club.

The clauses run for the remainder of the players' existing contracts, but with salaries again to be paid in full, the administrators and Green must deal with a disparity between income and outlay.

The CVA proposal estimated a shortfall of around £3m, which it is expected will be met by Sevco through either transfer fees or season ticket revenue.

If that revenue is insufficient to meet what are known as the CVA trading costs, the administrators will fund the shortfall from the £8.3m loan from Green's consortium and that figure will subsequently be deducted from the creditors' pot.