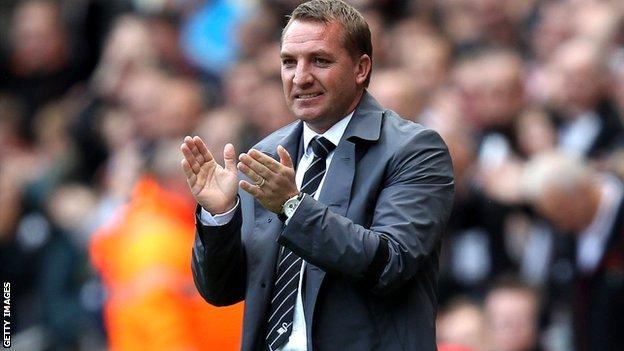 Rodgers, who led Swansea to 11th place in the Premier League last season, is poised to sign a three-year contract.

"It's a great appointment for him and the biggest gamble the club have taken in a long time," Lawrenson said.

"Liverpool supporters will give him a chance. They will give him time. But if they don't look like finishing anywhere near top four, what do the owners do?"

Rodgers had coaching spells at Reading and Chelsea before taking charge at Watford in November 2008.

Having guided the Hornets to 13th in the Championshp he joined Reading in the summer of 2009 but left the club by mutual consent in December of that year following a string of indifferent results.

He was appointed Swansea boss in the summer of 2010 and they became the first Welsh team to reach the Premier League after beating his old club Reading in the play-off final.

Asked about the 39-year-old's credentials, Lawrenson told the BBC News Channel: "Rodgers has done a great job at Swansea, everyone loves the way they play their football.

"The chance for Brendan to manage a club which is in the top 10 in the country was too much to resist. It's a different challenge for him, the club will be expected to win every game.

"Liverpool spent an awful lot of money last season, there's no doubt they overspent. It's a big job for Rodgers because he'll be responsible for everything as there's no director of football.

Match of the Day presenter Gary Lineker: "I feel this could be a very shrewd appointment. He totally gets the way the game's evolving."

Former Liverpool striker Michael Owen on Twitter: "Brendan Rodgers to Liverpool. Could be a good bit of business. Looking forward to next season's Premier League already!"

"Swansea have lost managers before, Roberto Martinez went to Wigan. They're a very good and well-run football club."

"Quite a lot has been spoken about Rodgers in the corridors of football. Players have respect for him. When he came to see me, we sat down for three to four hours and he came with his philosophy.

"He brought with him a heavy file which he went through explaining why and how the game should be played.

"He was impressive, he was thoughtful, he was very sincere and he was one of those people who combined technical knowledge with spending his time learning his trade.

"You don't meet too many young managers like that. When he's in the dressing room, people will listen to him but he's not a ranter or raver."

Reading chairman Sir John Madejski, who appointed Rodgers to the Reading job in 2009, before he left later that year, told BBC Radio 5 live:

"I've always considered Brendan Rodgers to be a first-class manager and a great guy. He is a very straight-forward person and I think his determination and unbridled honesty would have impressed the Liverpool club owners.

"While he was at Reading we had a good and warm rapport but the results just didn't work out. We parted on good terms and I wished him every success in the future at the time and I am delighted he is back up there.

"He has done a great job at Swansea - I'm all for young blood coming along and taking over the reins - it is not always about people who have been in the game for years - sometimes it is great to have fresh blood because they can respond to players because they are more akin to them."

Alec Chamberlain, who worked as a goalkeeping coach under Rodgers at Watford, told BBC Radio 5 live:

"It's been a fantastic rise for Brendan Rodgers, from his time cutting his teeth in management at Watford to Reading then really finding success at Swansea.

"I thought that Roberto Martinez would have had a very good chance, but Brendan Rodgers has taken Swansea into the Premier League and they've performed so well.

"Everybody has stood up and taken notice this year. All credit to Brendan for the way he's gone about his job there."

"I always say that when you have a philosophy on football, you need the players who can instil that. Are they the type of players who can play the way Rodgers wants them to? They will have to have some adjustment.

"We have to give the situation time to develop. You have to come to a point where you can't keep changing managers year in, year out. It's been 20 years since we have won league.

"We've been chopping and changing. We need to do what is in the best interests of the club, even if that means we don't qualify for the Champions League in the next three years."

"For what Brendan Rodgers has achieved at Swansea, he deserves huge respect. He's worked under Jose Mourinho at Chelsea so he knows the score and he's worked with top players.

"The new manager will need to bring in new players again to take Liverpool from a top-eight club to a top-four club. That's going to be really difficult. It's a massive challenge."