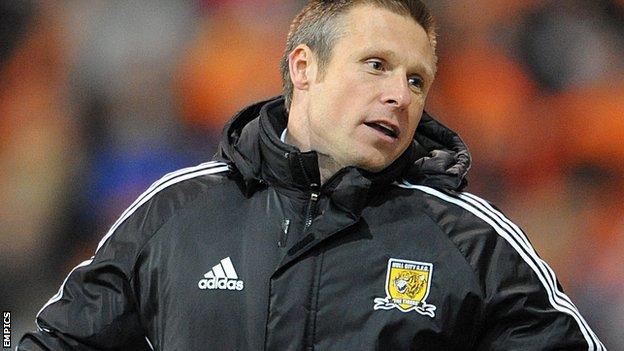 Former Hull City boss Nick Barmby has lost his appeal against his sacking.

Barmby was relieved of his duties on 8 May, with the club citing comments made by the former England international in the media as the reason.

Owner and chairman Assem Allam chose to support the decision of his son and vice-chairman Ehab to remove Barmby.

The former Tigers player, 38, is now seeking the advice of the League Managers' Association on what action, if any, to take.

"It goes without saying that I am very disappointed that there wasn't a favourable outcome to my appeal against my dismissal as manager of Hull City FC," he said.

"I was surprised that the club did not appoint an independent person to hear the appeal and I am now considering the outcome in detail and will consult with the LMA's legal team before deciding on any further action."

A statement issued by Allam on Thursday said: "I have decided to uphold the decision to dismiss Nick for reasons previously stated.

"I would like to assure the club's supporters that this decision has not been taken lightly and all other options were explored before I decided to uphold the dismissal.

"However, as explained in the press statement given by the vice-chairman, Nick's behaviour has led to the breakdown of trust and confidence with the board and I therefore felt I had no other option."

Barmby joined the Tigers from Leeds United in 2004 and, having been made caretaker manager after Nigel Pearson left for Leicester City in November 2011, he was appointed permanent boss in January.

Ex-Birmingham City, Wigan and Sunderland manager Steve Bruce, who has been linked with the vacancy, declined to comment when contacted by BBC Radio Humberside.