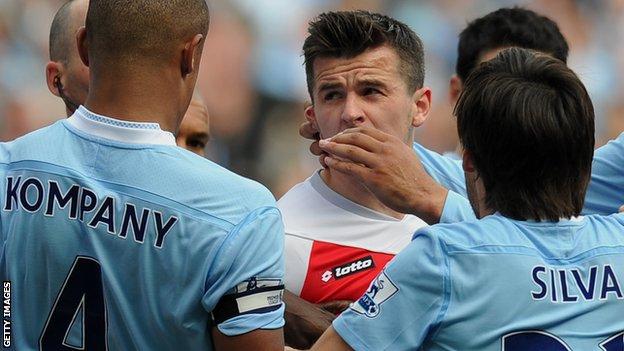 Queens Park Rangers captain Joey Barton has been banned for 12 matches after being found guilty of two counts of violent conduct.

Barton, 29, was sent off in QPR's defeat at Manchester City on the final day of the season and had accepted a charge over his clash with Sergio Aguero in the wake of his red card.

He was also found guilty over a separate clash with Vincent Kompany.

Longest bans handed out by FA

The midfielder has been fined £75,000 by the Football Association.

Barton was initially sent off for an off-the-ball clash with City striker Carlos Tevez and will serve a four-match ban for that offence, as it was his second sending-off of the season.

The incidents involving Aguero and Kompany came after Barton had been dismissed, meaning they fell outside the jurisdiction of the referee, and have resulted in a further eight-match suspension.

The chairman of the regulatory commission stated after the hearing: "There are rules of conduct that should be adhered to, and such behaviour tarnishes the image of football in this country, particularly as this match was the pinnacle of the domestic season and watched by millions around the globe."

A Rangers spokesman said: "QPR will be making no comment in regard to the Joey Barton case. Internal investigation will begin in due course."

Speculation has been mounting over Barton's future at the west London club and Rangers chairman Tony Fernandes had admitted there was uncertainty over the player.

"One to one he's a decent guy, but he's lost his head. It's a couple of years since he was at Newcastle and he had problems with Alan Shearer as manager. When you have demons it is difficult to change things overnight."

"There are experienced people who will come back to me and we'll review the whole situation," he told BBC Sport.

"There's a process that the club goes through in terms of sendings off and disciplinary action. That's something [manager] Mark Hughes will report through to the board."

In the immediate aftermath of the game, Barton tweeted: "People are forgetting Tevez started the fracas by throwing a punch to the head."

The following day he tweeted: "Right, enough about yesterday, I apologise to everyone offended by it.

"If that's not enough for some, so be it. Life is too short."

He added: "Things happen on the pitch, in the heat of battle sometimes. Not how we always plan them to happen."

Speaking to BBC Radio 5 live former Manchester City team-mate Danny Mills spoke out against the length of the ban.

"If I'm honest I think it's a bit over the top and harsh. You have to put it in perspective when you look at other cases. [Manchester City's] Ben Thatcher got eight games when he wiped out Pedro Mendes [of Portsmouth] and that was verging on GBH.

"Suarez was guilty of racist abuse - one of the vilest things in modern football - he got eight games."

Former Wales and Blackburn midfielder Robbie Savage added: "I disagree with the FA and the committee talking about the magnitude of the game.

"The four games are there for Tevez and the four extra for Aguero I agree with and to be fair he did go to try and head-butt Kompany so you could say nine or 10 games is probably fair.

"He's let himself and his manager down. Knowing Mark Hughes as I do and how he handles disciplinary problems, I'd be surprised if Joey plays for QPR again."