Cesc Fabregas salvaged a point for Spain as the champions began the defence of their European title in a pulsating encounter in Gdansk.

The Barcelona midfielder fired in after a clever pass by David Silva as Spain came from a goal down against Italy to draw the opening match of Group C.

Substitute Antonio Di Natale had given Italy a deserved lead on the hour mark.

Spain might have snatched all three points but Fernando Torres spurned a succession of late chances.

"The Italians in the first half were exceptional. Tactically they got it right and they made Casillas make four good saves. After they scored, Spain pushed on a bit more and upped their tempo. Both teams had chances to win and it was a thoroughly entertaining game. A draw is a fair result. If the Italians continue to play this well and get through the group they really could be a threat."

The result ended Spain's run of 14 successive victories in competitive matches, dating back to their defeat by Switzerland in the opening match of the 2010 World Cup.

While their form was not in question, the weight of history was stacked against La Roja coming into the tournament.

No team had ever won three major tournaments in succession, none had ever successfully defended the European Championship title.

Fatigue was another source of concern for Spain manager Vicente del Bosque, whose 23 players had played a total of 89,884 minutes in the past season, some 17,000 more minutes than their Italian opponents.

There was more than a hint of lethargy about Spain in the opening exchanges. They lacked purpose and penetration having opted to play without an obvious centre forward as Fabregas was preferred to Torres in the starting XI.

Having seen his smile and his form return in the final weeks of the season at Chelsea, this was another setback for Torres on an afternoon he will ultimately want to forget. Silva threatened twice in the early moments, but it was Italy who looked the more composed in the early stages.

Spain goalkeeper Iker Casillas was forced to dive low to his right to turn away an Andrea Pirlo free-kick after 13 minutes as Cesare Prandelli's side, led by the tremendous Daniele De Rossi, tackled, battled and denied their more celebrated opponents space. 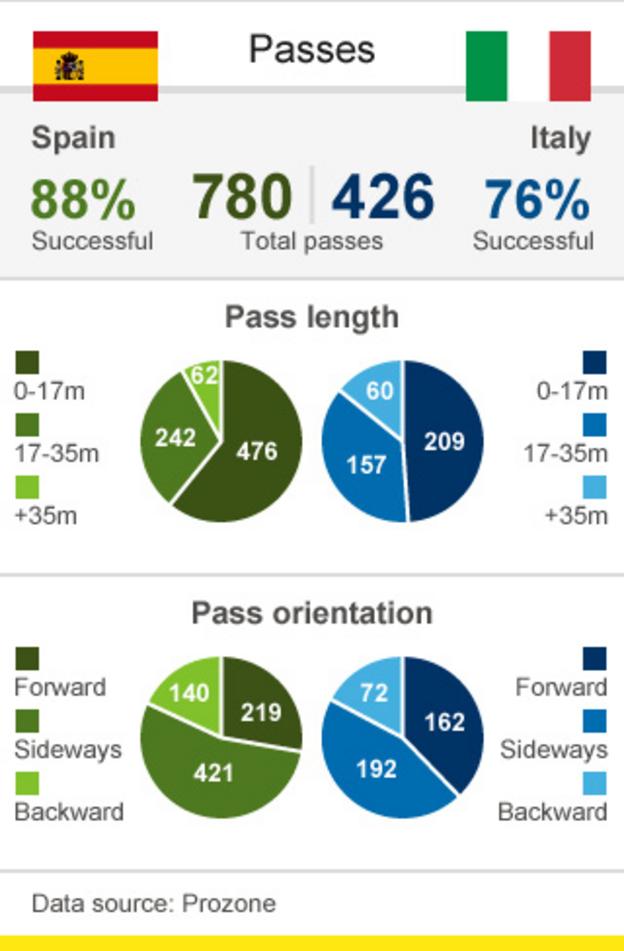 The Azzuri were equally effective with the ball ensuring Casillas was much the busier goalkeeper as half-time approached.

Antonio Cassano dragged a shot beyond the far post when well-placed but it was two nervy moments from Spain goalkeeper that gave his side most cause for concern.

First, he lost control of a back-pass only to be fouled by Cassano, before he spilled a fierce low shot from Claudio Marchisio as the ball ran to safety.

Spain were only threatening sporadically. Xavi and Andrés Iniesta were constantly probing and just before the interval linked up only for the latter to shoot over having collected his team-mate's looping pass.

It was Italy who finished the half the stronger, however. A piece of trickery wide on the left touchline by Mario Balotelli set in motion another fluid attack. It ended with Casillas sprawling low to his right to turn away Thiago Motta's close-range header after a pin-point cross by Cassano.

The interval did little to disrupt the breakneck pace of play. Fabregas set Iniesta free down the left, only for Buffon to deny him with a fingertip save.

But it was Balotelli who could and perhaps should have broken the deadlock moments later. The Italian striker robbed Sergio Ramos of possession wide on the right before bursting towards goal but he then hesitated long enough to allow the Real Madrid defender back in with the goal apparently as his mercy.

The Manchester City striker was replaced by Di Natale moments later - he was to have an instant impact.

Pirlo skipped beyond Xavi in midfield, before playing a cleverly weighted pass that allowed the Udinese forward to slip between Gerard Pique and Sergio Ramos and calmly stroke his curling beyond the advancing Casillas.

Spain's reponse was as instant as it was devastating. Three minutes later, Iniesta conjured a pass through to Silva, who flicked the ball into the path of Fabregas and the Barcelona player struck a crisp low shot underneath Buffon.

Both teams had the chances to win the match. For Italy Sebastian Giovinco picked out the Di Natale closing on goal but the 34-year-old could only poke wide. Claudio Marchisio went closer still when, after scampering 50 yards, he exchanged passes with Di Natale, only to shoot straight at Casillas when the space opened up.

Spain, too, had chances. The best of them fell to Torres, who came on as a substitute. Three chances came and went for the Chelsea striker, the best of which saw his lob float a yard to far with the goal at his mercy. To make matters worse, he was later booked for a rash challenge.

The result may ultimately matter little, with both sides displaying enough to suggest their passage to the knockout stages should be relatively untroubled.

The Italians, however, were understandably the more content at the final whistle.