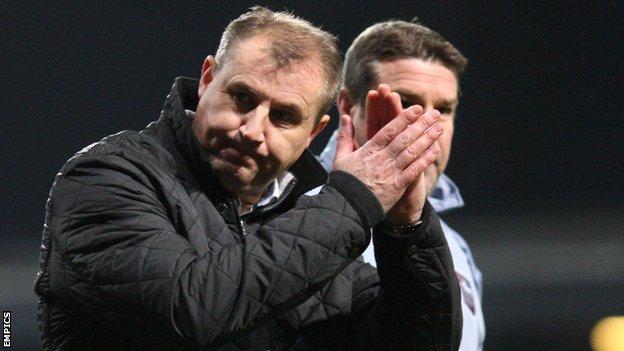 Ipswich Town boss Paul Jewell is hopeful he will continue at the helm of the club beyond the remaining 12 months of his contract.

Jewell could only muster a 15th-place Championship finish in his first full season at Portman Road.

"I know there's a year to go. But it wouldn't have taken a lot of money for the owner to get rid of me last year," he told BBC Radio Suffolk.

"I'm just hoping I can be here for a long time and can bring success here."

He added: "[Staying at the club] certainly won't be a money issue. I love working here. I love the area and love my job here.

"I won't work any harder because I can't. It's impossible.

"My job ticks all the boxes and the one I've got to tick at the top of the list is getting the team right."

Jewell enjoyed a successful start to life at Portman Road, guiding Town away from the Championship relegation places after taking over from Roy Keane in January last year.

But Ipswich failed to make progress last season, finishing two places lower than in the previous campaign with one less point.

The former Derby boss received criticism for compiling what some perceived to be an ageing squad and he intends to reassess his recruitment policy this summer.

"If we can get younger, hungry, forceful, stronger players we will," he said.

"But everyone is chasing the same players. We'd all like 22 year olds in our team.

"But I think the art is getting the balance between experience and youth. Last year I had too much experience.

"If you can have two or three in your team who can settle the youngsters down they are worth their weight in gold."