Michael Krohn-Dehli's expertly taken first-half strike earned Denmark a shock win against a Netherlands side who missed a host of chances.

Krohn-Dehli drifted away from two defenders to fire home the winner.

But the Dutch dominated only to waste numerous efforts, with Arjen Robben and Robin van Persie the main culprits.

Clarence SeedorfMatch of the Day analyst

"It happened to Robin van Persie at the 2010 World Cup. He maybe takes on too much responsibility. He should be flying after a season like he has had [with Arsenal]. He's not relaxed enough. When he plays for Arsenal it's a different Van Persie."

Robben came closest when he shot against the post and the Danes survived a late handball appeal against Lars Jacobsen to hold on for victory.

Denmark coach Morten Olsen's pre-match warning that the Netherlands were simply better than his side could easily have been dismissed as mind games.

But for long spells of the opening Group B encounter at the Metalist Stadium in Kharkiv, the reality backed up Olsen's fears and the Danes struggled.

Netherlands, one of the pre-tournament favourites, combined their undoubted guile, creativity, pace and attacking quality with midfield grit and organisation.

Robben and Van Persie provided the cutting edge, and they had a series of opportunities to put Bert van Marwijk's side ahead before the Danes took the lead.

Robben and Van Persie then combined brilliantly on the right only for the Bayern Munich winger to fail to pick out one of two team-mates in the middle. 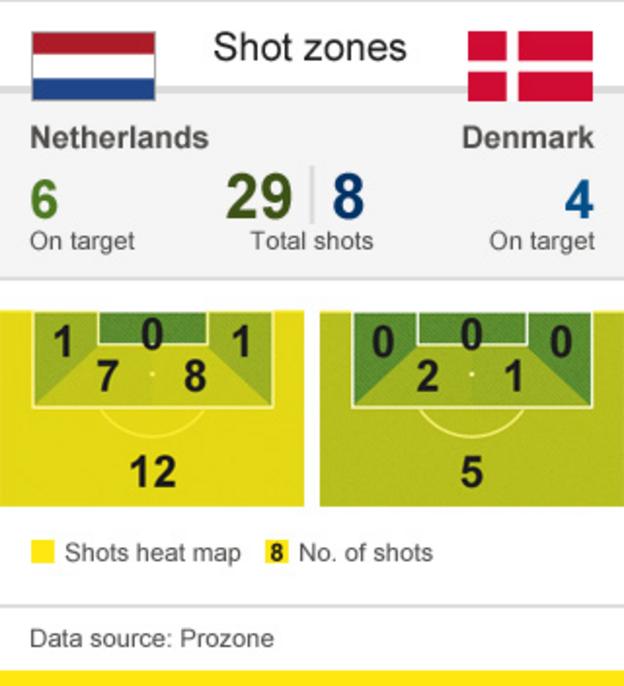 Sneijder also sent a header wide and as the pressure mounted, a Dutch goal looked inevitable.

But the Danes remained resolute in defence - largely thanks to a spirited display by captain Daniel Agger - and they went ahead with their first meaningful attack.

Krohn-Dehli took advantage of a lucky bounce of the ball after a battling run on the left flank by Simon Poulsen, dummied two defenders and shot low through goalkeeper Maarten Stekelenburg's legs after 24 minutes.

Niki Zimling did have a chance to double the lead soon after, but failed to properly connect with a difficult volleyed effort.

That was, however, a brief interlude to a series of Dutch attacks.

Robben curled an effort against the foot of the post from the edge of the box after being gifted the ball by an abysmal clearance from keeper Stephan Andersen.

And Netherlands, backed by a typically noisy and colourful travelling support, started the second period in blistering fashion and could have had four goals within 10 minutes

Robben shot over after cutting in from the left, and Van Persie miskicked dreadfully when in a good position and was also unlucky with another low effort.

Netherlands left-back Jetro Williams' inclusion means he is the youngest player to feature in the European Championship finals at just 18 years and 71 days old. Whose record did he eclipse? Enzo Scifo, the brilliant Belgian midfielder who was 18 years and 115 days when he faced Yugoslavia in 1984.

Mark van Bommel also went close with a fizzing 25-yard strike that drew a superb save from Andersen.

At the other end, goalscorer Krohn-Dehli's 20-yard strike brought a fine stop from Stekelenburg.

And, although the Dutch started to look increasingly frustrated, they still created chances.

Johnny Heitinga headed over, substitute Klaas-Jan Huntelaar - left out of the starting line-up despite scoring 12 goals in qualifying - went through on goal but was denied by some alert and brave goalkeeping, and Huntelaar also had a decent claim for a penalty dismissed.

Defender Jacobsen handled the ball while under pressure from Huntelaar, but referee Damir Skomina waved away the Dutch appeals.

The Danes held firm and now have a great opportunity to progress to the quarter-finals, while the Dutch - runners-up at the last World Cup - must win at least one of their remaining two fixtures, against either Germany or Portugal, to have any hope.