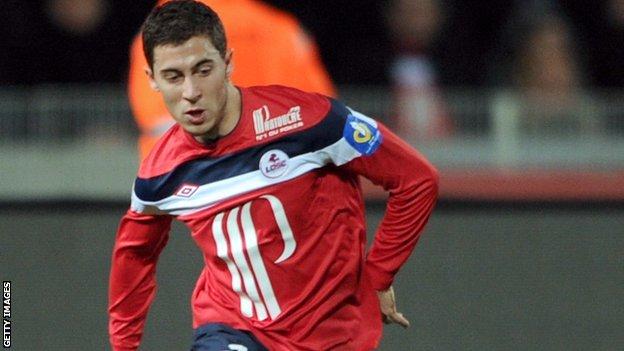 Eden Hazard's future will be decided after Lille hold talks with Manchester City and Manchester United next week.

No formal offers have been made but the Premier League rivals are both interested in signing Hazard.

Belgium forward Hazard, 21, recently said he would be playing in Manchester next season.

Lille are unwilling to enter negotiations until after Sunday's final Ligue 1 match against Nancy, although they cannot finish higher than third.

Who is Eden Hazard?

The French club want to strike a deal on their terms and maximise the return on one of Europe's leading talents.

Hazard has scored 17 goals in 37 league games this season, with a further 16 assists, and featured in all six of Lille's Champions League group games.

He scored his first goal for Belgium, was named Ligue 1 player of the year for the second successive campaign, and has also been linked with Chelsea, Tottenham and Real Madrid.

But Premier League champions City and runners-up United have emerged as the only realistic candidates, and both have been in dialogue with Lille for some time.

Les Dogues are in no rush to complete Hazard's sale but accept he will leave this summer.

Meanwhile, they also expect contact from Liverpool next week to discuss the future of midfielder Joe Cole, who has spent the season on loan from Anfield.