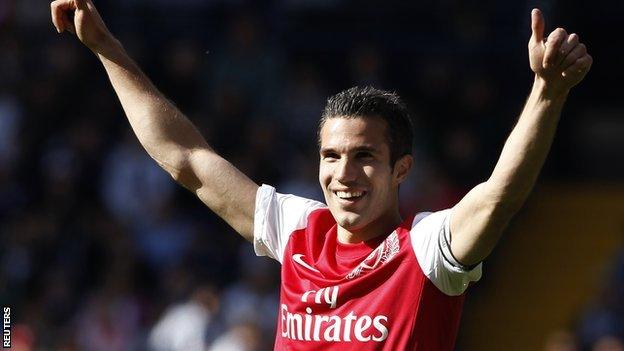 Striker Robin van Persie has joined up with the Netherlands squad ahead of Euro 2012 having yet to make a final decision on his future with Arsenal.

The 28-year-old, who has a year left on his current contract, held talks with Gunners boss Arsene Wenger and chief executive Ivan Gazidis on Wednesday.

But no decision was made and Van Persie will now focus on his national team's preparations for the Euros.

The 28-year-old scored 41 goals in 53 games for club and country this season.

Of that tally, 37 came in 48 appearances for Arsenal and he was the Premier League's leading marksman with 30 goals in 38 matches.

A number of leading sides have registered interest in signing the Gunners captain, who was named both the Professional Footballers' Association and Football Writers' player of the year.

When asked if his future would be resolved quickly, he said: "You never know but Arsenal is a massive club. Whatever happens, I'll always love this club.

"I have been playing here for eight years and I love this club. Whatever happens, that will never change. We will sit down next week."

Van Persie was unwilling to open negotiations until the campaign had ended, with Champions League football a key consideration.

Another factor is Arsenal's transfer market activity, and Van Persie has been encouraged by the signing of Lukas Podolski from FC Cologne for £10.9m.

"Will Champions League football help to keep Van Persie?" said Wenger. "It makes it easier to attract good players and keep them."

Arsenal are expected to offer the Dutchman a new four-year deal that would break their current wage structure, while Van Persie and his family are happy in London.

With the Netherlands assembling for their training camp in Switzerland on Thursday, there was little time to reach an agreement.

Van Persie was always open to the idea of playing in the tournament before coming to a decision, but Arsenal wanted the situation dealt with before he met up with the Dutch squad.

The Gunners do not want a repeat of last summer, when Cesc Fabregas and Samir Nasri were sold after the season had started.

Van Persie was signed from Feyenoord for £2.75m in 2004 and team-mate Laurent Koscielny is confident he will stay.

"He will be here next season," said the defender, who scored Arsenal's winner at The Hawthorns.

"He was a fantastic captain, he was so important for us. He will be here scoring goals for us next season."