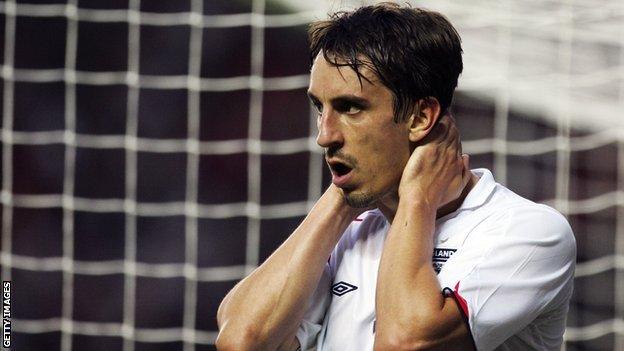 England manager Roy Hodgson says Gary Neville's role as a media pundit played a big part in his selection as a coach.

The appointment of the former England defender, 37, to the international set-up came as a surprise to many.

And Hodgson said: "He's not a person I have known well before inviting him to join me in the team.

"But he's been someone I have been very impressed with since he has joined Sky in terms of his tactical and analytical ability and his knowledge of players."

He added: "I wanted someone who was a younger up-and-coming coach, someone who is starting off on his coaching career.

"But in particular I wanted someone who was able to give me the benefit of his experience of playing for England and being involved with England in international tournaments.

"Also he is someone who would relate with a lot of the players because the age difference is so much closer than it is for Ray [Lewington, coach] and myself," he added.

Neville retired from playing in February 2011, after 602 appearances for United and 85 for England.

"I'm really pleased that the FA has been able to sort out a contract with him.

"I am looking forward to working with him and Ray Lewington in the months and years to come."

The news of the appointment came as no surprise to his former United team-mate Gary Pallister, who told BBC Radio 5 live he was more surprised that he was not already coaching.

"Initially when he retired I thought coaching was a natural path for him.

"I thought he might be a future manager of Manchester United once he got his apprenticeship over with, there's a possibility now that he could go on to be an England manager.

"He's going to get a great schooling on what it's like to deal with the pressures of coaching and see the manager work first hand with the national team.

"Gary has not been used to failure over the years so I wouldn't bet against him being a success again."