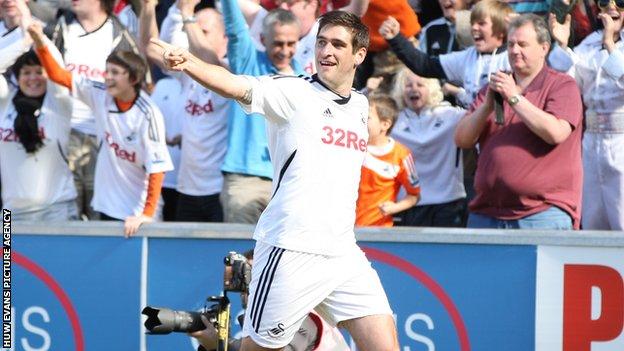 Danny Graham scored his 100th career goal to secure victory for Swansea over Liverpool to end their debut Premier League season on a high.

Swansea had dominated the first half and Gylfi Sigurdsson twice went close to giving them the lead.

Liverpool were much improved after the break and Andy Carroll's overhead kick was saved by Michel Vorm.

There was a carnival atmosphere at the Liberty Stadium with many home fans dressed as Elvis to celebrate Swansea's first season in the Premier League.

Swansea enjoyed plenty of early possession and Joe Allen dispossessed Jonjo Shelvey but his shot across the face of goal eluded Graham at the far post.

Liverpool's nervy start continued as goalkeeper Alexander Doni, in for Pepe Reina, was penalised for picking up a long back pass from Andy Carroll.

From the resultant free-kick Gylfi Sigurdsson passed the ball short to Scott Sinclair but his shot was deflected over for a corner.

Liverpool's first chance of note came on 14 minutes when Maxi Rodriguez, in possibly his final game for the Reds, flashed a shot wide of the post.

But Swansea continued to control the game and Sigurdsson saw his shot blocked on the line by Maxi following Allen's corner.

The visitors were finding it hard to get a foothold in the game although Ashley Williams was forced to head clear Shelvey's effort from the edge of the area.

Sigurdsson, after being fouled by Shelvey, hit a free-kick low past the edge of the wall but Doni got down to his right to tip the ball round the post.

Match of the Day commentator

"It's another memorable victory for Swansea City in a season that will go down in the history of this club as one of their very best. Brendan Rodgers' team getting all three points on the final day of the season thanks to a late goal from Danny Graham."

Dyer should have done better when Sigurdsson's pass put him in the open but he shot straight at Doni.

Carroll's frustration boiled over during the final minute of the first half when he was involved in a scuffle with Swans captain Ashley Williams and both players were booked by referee Mark Halsey.

Liverpool started the second half with more purpose with Jordan Henderson firing straight at Vorm.

Carroll came closest to opening Liverpool's account when he hit a spectacular overhead kick which forced Vorm into a fine save.

Substitute Craig Bellamy flashed a shot well wide of the post before Neil Taylor snuffed out an opportunity for his Wales team-mate, who was bearing down on goal.

Liverpool looked the more likely side to score as the game entered its final stages with Carroll's low shot forcing Vorm into another save.

Angel Rangel and Sinclair combined on the right and Graham converted coolly from close range for his 14th goal of the season.

The victory meant Swansea finished their first season in the Premier League in 11th with Liverpool completing the campaign in eighth position.

Swansea manager Brendan Rodgers: "It's been a wonderful day for the football club and all the credit to the players and the supporters.

"To finish it off with 14 clean sheets, playing how we wanted to play and to arrive in 11th place is an incredible achievement.

"It's important now to celebrate that success and look to improve over the summer and go again for next season."

"They've had a great season and to win in front of their home fans in the last game of the season will send them away through the summer with a good taste in their mouth."