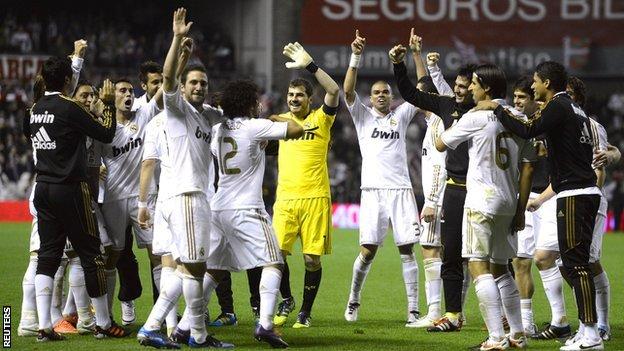 Real Madrid clinched the La Liga title for the first time since 2008 after their 3-0 win over Athletic Bilbao.

The Portuguese becomes the third coach to win league titles in four different countries after triumphs with Porto, Chelsea and Inter Milan.

"I won the league title in Portugal, Italy and England, but this one has been the toughest," said Mourinho.

"I've won seven league titles overall and I know what it feels like. Barcelona won all their games, as befits the great team that they are. They've been winning to the very last day.

"They are a club with great tradition that knows we deserved to win this title."

Midfielder Xabi Alonso added: "We finally managed to win La Liga. It's been a long season and there's a lot of merit in winning the title with two games left in the championship. We have to enjoy it now.

"We competed all season with a great opponent like Barcelona, and that's why there's so much merit in winning the title before the campaign ends. We've had a great run."

The success provides much relief for Los Blancos fans after their disappointing defeat by Bayern Munich in the Champions League semi-final.

Having converted 25 consecutive spot-kicks, Ronaldo saw his penalty saved by Manuel Neuer in the shoot-out against the Germans.

And once again, the former Manchester United man was off target, with his penalty kept out by Bilbao goalkeeper Gorka Iraizoz.

Higuain gave Real the lead with an arrowing effort into the top corner, and Ronaldo was involved again, laying on Ozil, who tapped in at the back post, before the Portugal international completed the scoring with a header.

Earlier in the day, Lionel Messi broke the record for goals in a top-flight European season as he took his Barcelona tally to 68 with a hat-trick in the 4-1 win over Malaga.

Bayern Munich legend Gerd Mueller's record had stood for 39 years but that mark was bettered as Messi claimed his ninth treble of the season.

Ajax sealed their 31st Dutch title with a straightforward 2-0 win over VVV Venlo.

The victory put them beyond the reaches of Feyenoord with one match remaining.

Swiss midfielder Siem de Jong's double inside the hour was enough to start the party in the Amsterdam Arena.

AC Milan moved to within a point of Italian league leaders Juventus after the defending champions beat Atalanta 2-0 after goals from Sulley Muntari and Robinho, while Juve drew with lowly Lecce 1-1 in Turin. There are two matches remaining in Serie A.