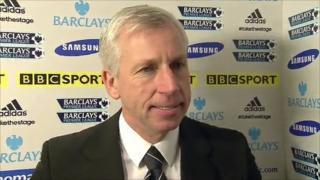 Pardew says Cisse's second was "one of the great goals" and believes arriving early for their match ensured they were on top form to take on the Blues.

The 2-0 win keeps Newcastle firmly in contention for a place in the Premier League's top four, and Pardew says he is targeting a place in the Champions League as he looks ahead to Sunday's clash with Manchester City.

How has your team fared this season?