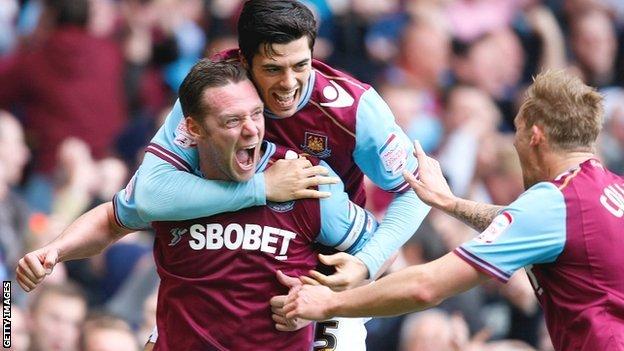 West Ham sealed their place in the Championship play-off final by completing an emphatic semi-final victory over Cardiff.

The Hammers came into the second leg with a firm grip on the tie courtesy of a 2-0 win in Wales last week.

They strengthened this in the 15th minute when captain Kevin Nolan headed in from a Matt Taylor corner.

They made sure of the win when Ricardo Vaz Te fired in a superb drive with Nicky Maynard adding a late third.

Sam Allardyce's side remain on course to make amends for allowing automatic promotion to slip through their fingers. They are now just one game away from the Premier League, with either Birmingham or Blackpool representing the final hurdle at Wembley on Saturday, 19 May.

It will be West Ham's first appearance at the national stadium since the 1981 League Cup final.

For much of this season, United occupied a top-two spot and looked likely to earn an instant return to the Premier League, but Reading's late surge and Southampton's greater consistency throughout the campaign consigned the Hammers to an extended route to the top flight.

Three is the magic number

The club finishing immediately outside the top two has been the most successful in the play-offs in the last 20 years, gaining promotion seven times. West Ham are on course to add to this record.

While West Ham's away form is the best in the Championship this season - a fact they emphasized at Cardiff City Stadium last Thursday when Jack Collison's goals gave them an impressive first-leg win - their inconsistent home form is arguably the main reason they did not attain automatic elevation.

Four defeats and eight draws for the Hammers on their own turf was enough to give Cardiff hope of upsetting the odds by becoming the first team to overturn a two-goal first-leg play-off deficit at this level and thus keep alive dreams of a first top-flight season in 50 years.

However, this depended on them scoring the first goal and their failure to achieve this killed the tie.

The Bluebirds had made an encouraging start - and could have had a penalty had referee Mike Dean not been unsighted for a clumsy Winston Reid challenge that felled Kenny Miller in the box - but instead they suffered a terminal blow when Nolan nodded in after Carlton Cole's initial header from Taylor's corner had been blocked.

Malky Mackay's side never recovered as the home side capitalised on their position of superiority.

Gary O'Neil was close to extending West Ham's lead with a side-foot volley from 12 yards that struck the top of the bar, before Vaz Te did just that with a fiercely-struck shot that flew across City keeper David Marshall and into the far top-corner of the net.

The second half was a mere formality as a relaxed West Ham played out a comfortable 45 minutes, which they decorated right at the very end as substitute Maynard found space in the box to smash a shot past Marshall.

The Hammers' only concern was an injury to Collison, who was taken to hospital as a precaution for a dislocated shoulder.