One of the most enthralling Premier League seasons in history went down to the final minute as Manchester City snatched the title from Manchester United in stoppage time against QPR.

It was a season full of twists and turns with plenty of drama off the pitch as well as on it, but in the end it was the blue half of Manchester celebrating their first league title since 1968.

BBC Sport looks back over the past 10 months and picks out some of the moments that shaped the destiny of the championship. 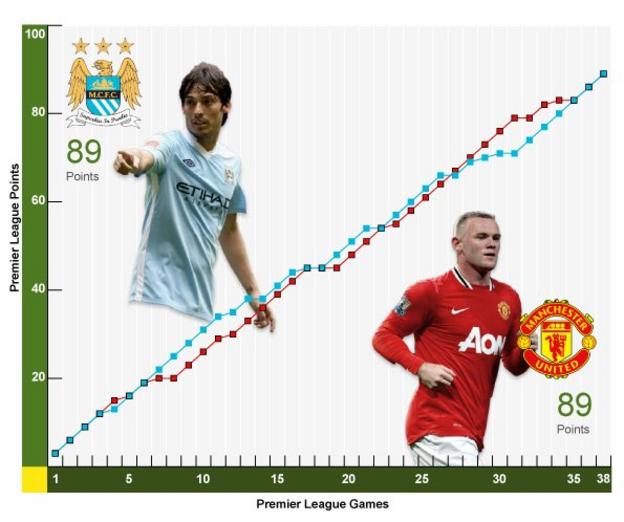 It's unusual for me to take any notice of the Community Shield but this time I did. It was a real statement by United and, if you were one of the other sides with an eye on the title, you would start to worry

Before a ball was even kicked in the Premier League there was a fixture that set-up the see-saw rivalry that unfolded over the season, as Manchester United came back from two goals down to beat Manchester City 3-2 in the Community Shield.

One side had aspirations of mounting a successful defence of their league title, while the other was determined to emerge from the shadow of their city rival and prove they too were serious title contenders, rather than just the 'noisy neighbours' Sir Alex Ferguson once called them.

Both sides were quick out of the traps when the Premier League season got under way as Ferguson's men took maximum points from their first three games with wins over West Brom and Tottenham, before sending out a signal of intent with an 8-2 demolition of Arsenal, while Manchester City followed up a dominant 4-0 victory over Swansea with a 3-2 win over Bolton.

They then inflicted a hefty 5-1 defeat on Tottenham to ensure they joined Manchester United at the top of the standings with nine points heading into September...

Manchester City made their way to the top of the table with a 3-0 win over Wigan, but it was to be a brief stay after Wayne Rooney's second hat-trick of the season helped Manchester United to a 5-0 win over hapless Bolton.

You cannot keep disrespecting the manager. Whether you like him or not, it doesn't make any difference. You're playing for yourself, your club, your team. There's quite a few managers I didn't get on with but you put your shift in, you play for pride because you're a professional. You simply cannot refuse to play in a football match. It's selfish, it's cowardly and bang out of order.

A 2-2 draw with Fulham - where Manchester City threw away a two-goal lead - paved the way for United to open up a two-point gap at the top of the table if they could beat Chelsea, who themselves had high hopes of challenging for a fourth Premier League title, but it was Ferguson's side who emerged triumphant, scoring three first-half goals for a 3-1 win.

That victory moved them five points ahead of Chelsea and two clear of Manchester City, who were about to become embroiled in a bitter feud with key striker Carlos Tevez.

The Argentine had been named on the bench as Manchester City beat Everton 2-0, and he was again among the substitutes for a Champions League fixture with Bayern Munich.

However, boss Roberto Mancini claimed he refused to warm up with 35 minutes left to play, prompting the Italian to insist that Tevez would never play for the club again for as long as he was in charge.

The Italian kept his word and Tevez was nowhere to be seen for City's next Premier League game against Blackburn and they certainly did not miss him as they eased to a 4-0 win.

Manchester United kept hold of first place with a 2-0 win over Norwich but their grip was relinquished when they could only draw 1-1 with Liverpool, during which Luis Suarez racially abused Patrice Evra.

Manchester City maintained their superb goal-scoring form as they swept aside Aston Villa 4-1 to set-up a tantalising encounter between themselves and Manchester United. However, nobody could have anticipated just what was to unfold at Old Trafford.

The 6-1 thrashing at Old Trafford says more about City than it does about their closest rivals and makes them an even bigger scalp - it is the announcement that they have seriously arrived on the big stage.

Having not lost at home in any competitions in more than a year, it was hard to see past the home side. But Manchester City were at their attacking best as Mario Balotelli and Edin Dzeko both scored twice, while Sergio Aguero and David Silva were also on the scoresheet in a 6-1 rout.

That victory moved Manchester City five points clear of their city rivals and strongly suggested that the Premier League title battle was going to be contested exclusively in the north west of England.

Sir Alex Ferguson celebrated 25 years as manager of Manchester United with a 1-0 win over Sunderland, but Manchester City maintained their five-point advantage at the top as they dug out a 3-2 win at QPR.

Both sides won their next Premier League fixtures, with United edging Swansea 1-0, while City handed Newcastle a first defeat of the season, beating Alan Pardew's side 3-1 at Etihad Stadium.

Newcastle, whose fine start to the season had them snapping at the heels of the leading duo, next travelled to Old Trafford where they held the home side to a 1-1 draw - crucial points were dropped by Manchester United in their title challenge.

Fortunately for United, Mancini's men also dropped points as they were held 1-1 by draw specialists Liverpool at Anfield.

It is often said a side that wins league titles is a side that is capable of grinding out victories and Manchester United were doing just that as a first career goal for Phil Jones secured a 1-0 win at Aston Villa.

Manchester City, meanwhile, maintained their 100% home record and their five-point lead over Manchester United with a comfortable 5-1 victory over Norwich.

December saw both sides crash out of the Champions League but United put their European disappointment behind them with a resounding 4-1 win over struggling Wolves, but for City the hangover lasted longer as they slumped to a first Premier League defeat of the season, losing 2-1 at Chelsea.

Finally, after weeks of chasing down their lead, Manchester United moved level on points with their city rivals after Dimitar Berbatov scored a hat-trick in a 5-0 win over Wigan, while Mancini's side could only draw 0-0 with West Brom.

United had the chance to ensure they entered 2012 top of the table but suffered a surprise 3-2 defeat by Blackburn at Old Trafford on New Year's Eve, leaving the title race delicately poised for the second half of the season.

Both sides kicked off 2012 with a defeat as Manchester United lost 3-0 to Newcastle, while Manchester City suffered a shock 1-0 defeat by Sunderland.

Only 48 hours after that surprising loss, City responded in style with a comfortable 3-0 victory over Liverpool that opened up a three-point gap at the top.

That put the onus back on United, who needed to do something special in January to reignite their title challenge.

That something was to be the return of midfielder Paul Scholes from retirement, and he made his Premier League return against Bolton on 14 January.

It was to be a memorable one as he scored the opener that put United on the way to a 3-0 win that moved Ferguson's side level on points with Manchester City once again.

With Manchester City easing to a 3-0 win over Fulham on 5 February, the pressure was on Manchester United to win their game against Chelsea the following day.

Things could hardly have gone worse for United as they found themselves 3-0 down with less than an hour gone but, inspired by Wayne Rooney, they staged a remarkable comeback as a double from the England striker and a Javier Hernandez strike ensured they escaped with a point.

It was a vital result and one that was looked upon as somewhat of a turning point in their bid to defend the Premier League title. Crucial wins over Liverpool and Norwich were to follow.

City kept themselves top with victories against Aston Villa and Blackburn, but their title rivals were keeping pace as the two clubs entered the business end of the season.

However, big news was developing behind the scenes at Etihad Stadium as Tevez returned from the wilderness to train with the first team, suggesting Mancini was prepared to reconcile differences and involve the striker in the club's end of season run-in.

A win against Bolton was followed by defeat by Swansea for Manchester City, while victories over Tottenham and West Brom were enough to move Manchester United into pole position.

In an effort to boost Manchester City's faltering title challenge, Mancini brought Tevez back into the fold for a crucial clash with Chelsea and, in a fairytale-esque return, he had a hand in the winner, providing the assist for Samir Nasir to fire home with only five minutes remaining to seal a 2-1 win.

That closed the gap on United to one point, but Mancini's men failed to build on that as successive draws with Stoke and Sunderland followed, which left them two points behind the defending champions, who had a game in hand over their rivals, heading into the penultimate month of the season.

Manchester United's lead at the top of the standings increased further as wins over Blackburn and QPR combined with a damaging 1-0 defeat for Manchester City at Arsenal looked to have effectively secured them the title, with the gap between the two sides an intimidating eight points.

The title race is not over yet. City have to go to Newcastle which is going to be a tough game. With two games left, the momentum is with City.

But a season that had already served up plenty of twists and turns was not finished just yet as Manchester United suffered a shock 1-0 defeat by fast-improving Wigan, and though they responded with a 4-0 victory over Aston Villa, they twice threw away two-goal leads to draw 4-4 with Everton.

Tevez, meanwhile, was making the most of his return to first team action as he scored four goals to help Manchester City to wins over West Brom, Norwich and Wolves, in the process closing the gap on Manchester United to three points.

A mouth-watering match between the two sides at Etihad Stadium on 30 April had City needing victory, while Ferguson knew a draw would suit his purposes.

That permutation perhaps proved Ferguson's undoing as his team selection suggested he was erring on the side of caution, and a Vincent Kompany header just before half-time was enough to hand City the win they needed to go top on goal difference.

A Yaya Toure brace gave Manchester City a 2-0 win at Newcastle and while Manchester United saw off Swansea by the same scoreline, Mancini's men were firmly in the driving seat.

The two teams went into the final game of the season level on points, but City's vastly superior goal difference meant a win at home to QPR would guarantee a first Premier League title.

United, meanwhile, travelled to Sunderland where they had to better City's result.

After 90 nerve-shredding minutes of normal time, it looked like United would be celebrating a 20th league title, leading 1-0 at the Stadium of Light while City trailed 10-man QPR 2-1 at the Etihad.

However, two dramatic stoppage time strikes from Edin Dzeko and Sergio Aguero sent the blue half of Manchester into ecstasy and capped off a truly memorable tussle for the title.