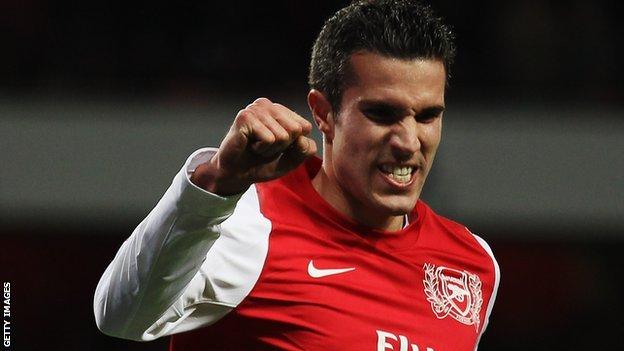 Arsenal striker Robin van Persie has been named the Football Writers' Association Footballer of the Year, the second time his achievements have been recognised in three days.

The winner is selected by FWA members, with around 400 football journalists casting their vote.

On Sunday the Gunners' captain was awarded the Professional Footballers' Association Player of the Year prize.

The Netherlands forward is the Premier League's top scorer this season with 27 goals.

He secured a landslide margin of victory in the voting ahead of Manchester United pair Wayne Rooney, in second place, and Paul Scholes in third. Fulham's Clint Dempsey finished fourth.

Van Persie was signed by manager Arsene Wenger from Feyenoord in 2004 and was used mainly as a second striker and occasionally out wide in the early stages of his career, but he has thrived in his present centre-forward role.

"I never really thought that I would end up as a main striker," recalled the Dutchman. "I actually never played there before - I did it a couple of times at youth level, but it was nothing really special.

"The boss didn't buy someone else [when Emmanuel Adebayor left] because he was convinced I could do it. I wasn't so sure.

"Sometimes, you just question yourself, if you are good enough at it. Those answers came.

"I have been convinced for a while now that I actually can play as a main striker. I just didn't know, and now I believe."

Arsenal manager Arsene Wenger said: "It goes beyond my level of expectation with the number of goals he has scored. He is sensational as well is as a captain. He has done extremely well on and off the field.

"Robin has a very healthy life, very focused on football - he takes care of everything. That's why he manages to do that. He is like Thierry Henry in that respect.

It is the second time in three years that the winner of the PFA award has gone on to win the FWA prize, after Wayne Rooney achieved the feat in 2010.

FWA chairman Steve Bates, chief football writer at the People, said: "Robin was the overwhelming choice of our members this season and deservedly so after a magnificent campaign for Arsenal.

"The quality of his goals, attacking movement and consistency in a turbulent season for the Gunners has been eye-catching.

"The considerable size of his majority in the votes cast by our members reflected the general view that he has been the season's most outstanding individual performer."