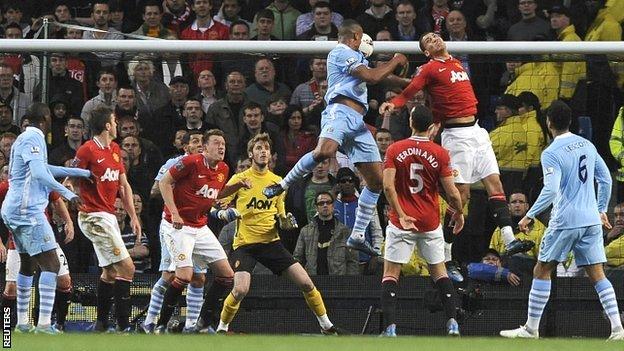 Manchester City took control of the Premier League title race with two games remaining thanks to a derby victory over rivals Manchester United.

City needed victory while Sir Alex Ferguson knew a draw would suit his purposes more than opposite number Roberto Mancini.

And the United manager perhaps decided to err on the side of caution, with Wayne Rooney employed as a lone striker.

In a game of few chances, City were the more positive side and deserved the three points from what had been labelled the biggest game in the Premier League's 20-year history.

United, in contrast, were passive, poor and lacking inspiration despite the high stakes, failing to get a shot on target as City keeper Joe Hart enjoyed a virtually untroubled night.

Ferguson's frustrations boiled over in the closing stages when he angrily confronted Mancini after City substitute Nigel de Jong was booked for fouling Danny Welbeck.

Mancini delighted City's support by giving the Scot as good as he got - complete with gestures - as they went head-to-head before fourth official Mike Jones stepped in.

With United dropping eight points out of their last 12, the momentum and advantage is now with City. Mancini knows victory in their last two games, away at Newcastle United and at home to Queens Park Rangers, would give them their first title since 1967-68.

City's recent resurgence has also proved decisive for their goal difference as they now hold an eight-goal advantage over United and, as referee Andre Marriner sounded the final whistle, their fans joyously celebrated a victory they clearly felt would prove decisive.

Ferguson's selection had an almost European look to it, with Rooney starting as the lone front man and Park Ji-sung starting in the Premier League for the first time since January with the apparent detail of marking Yaya Toure.

Watched from the stands by his father-in-law Diego Maradona, Sergio Aguero had City's best early chances but the Argentine was twice off target.

Rooney cut an isolated figure in a United side seemingly set out for containment - but he was still lively enough to enjoy several feisty exchanges with Kompany, one of which earned the City captain a yellow card from referee Marriner.

After being frustrated by United early on, City gradually increased the pressure and were rewarded with the breakthrough in first-half stoppage time. Chris Smalling failed to make contact with David Silva's corner and Kompany powered a header past United keeper David de Gea.

Park's contribution had been minimal and it was no surprise when he was the first player sacrificed by Ferguson before the hour, as he chose to give United more offensive options by introducing Welbeck.

Carlos Tevez had also worked hard but had been on the margins. He was replaced with the more defensive-minded De Jong after 67 minutes.

Mancini attempted to close the game down further by introducing Micah Richards for David Silva, United responding by introducing Ashley Young for the disappointing Nani, an alteration that met with little attacking response from United.

Toure had been dominant for City and almost wrapped up the victory with a 20-yard shot just wide following a trademark surge from midfield.

In the closing moments it was City applying the pressure as opposed to United, with De Gea saving well from Gael Clichy and the otherwise excellent Samir Nasri guilty of over-elaboration with an opportunity in the area after another powerhouse run from Toure.

United's display was so poor that they were unable to even rouse themselves for their trademark late rally, City surviving in complete comfort to take control of the title race.