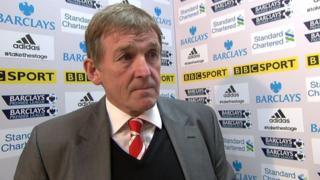 No luck for Liverpool - Dalglish

Liverpool boss Kenny Dalglish praises his team's home performance but laments having 28 shots on goal with no reward.

Dalglish says he "can't complaint" about his side's commitment, admits they need "something to fall" for them and acknowledges the "respectful" reception fans gave to former manager Roy Hodgson.

WBA recorded their first win at Anfield since 1967 thanks to Peter Odemwingie's 75-minute winner, which moves Albion up to tenth in the table - one point behind the Reds.

England are on an upward curve - Root

Shrewsbury boss in hospital with Covid