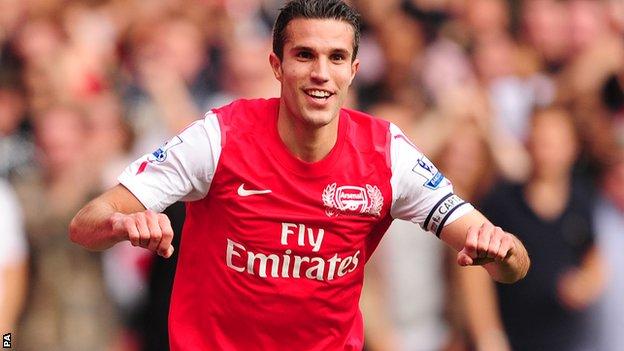 Robin van Persie has been named as the Professional Footballers' Association's Player of the Year.

The 28-year-old striker has scored 38 times this season, including 34 goals in all competitions for Arsenal.

The Dutch international, who is the Premier League's top goalscorer, said: "If other people are saying it, it is special, but it is even more special if your opponents are saying it.

"If they make up their minds that I'm the best player it is a big honour."

Van Persie, who has been inspirational for Arsene Wenger's side, was also quick to acknowledge the importance of his team-mates.

"Without them I could not have achieved it," he said. "For example, Theo Walcott, he has given me more than 12 assists and I do really appreciate that.

Van Persie is enjoying his most fruitful season since signing for Arsenal in 2004, helped largely by a fruitful switch into the centre-forward role.

"It took a bit of time but after a couple of months I slowly realised I could do a good job there."

Tottenham and England defender Kyle Walker was named the PFA's Young Player of the Year.

Manchester City had the most representatives in the team of the year, with four on the list - Joe Hart, Vincent Kompany, David Silva and Yaya Toure.