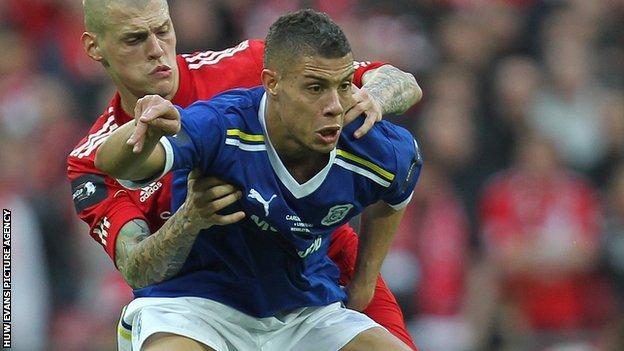 Striker Rudy Gestede has signed a two-year Cardiff City contract extension that will keep him at the club until the end of the 2013-14 season.

The 23-year-old Frenchman joined the Bluebirds ahead of the 2011-12 season.

He has scored twice in 24 Championship appearances, 19 of which have come off the bench.

A Bluebirds statement read: "Gestede has been rewarded for his efforts this season with an extended Cardiff City deal."

The former France Under-21 international, who from Metz on a free transfer in July, 2011, said: "I'm delighted to have signed a new contract with the club and look forward to playing my part in our future.

"I've had quite a good season I think although a couple of injuries have been frustrating.

"I'm close to being back to full fitness again now and hope to contribute to our play-off ambitions and beyond."

Gestede's latest injury - to an ankle - makes him a doubt for Leeds United's visit to Cardiff City Stadium on Saturday, where the hosts will continue their play-off bid.