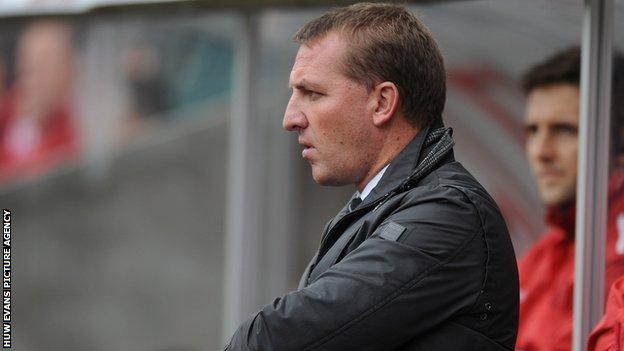 Swansea manager Brendan Rogers has promised his side will keep fighting for points even if they secure Premier League safety at Bolton on Saturday.

The Swans have 42 points with four games remaining and a win at the Reebok would secure their survival.

"You want to finish as high as you can," Rodgers said. "The finances available are incredible at this level.

"Every place counts for a lot and for a club like ourselves that extra place could mean an extra player for us."

He added: "The players are really motivated now to finish the season strongly and they will be up for every single game."

Even if the Swans lose to Bolton, they would still be safe if Tottenham Hotspur avoid defeat at QPR on the same day.

"Until it's mathematically correct, we will keep fighting," said Rodgers.

"It has been a wonderful return, in terms of points. Ultimately our goal was to stay in the league, which we knew was going to be an immense challenge.

"To be in this position with four games to go makes us very proud, but we want to continue to improve and we still have a lot of improvements to make for the remainder of this season."

The Swans could bank an additional £800,000 per place from the Premier League prize pot and Rodgers also revealed that the players have their own personal and team bonuses to play for.

"The players are really motivated now to finish the season strongly and they will be up for every single game," he said.

"The higher we finish, the more money they have in their pot and they receive whatever bonus they should receive."