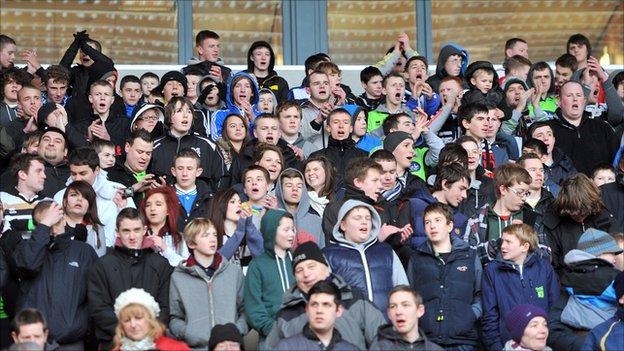 Darlington manager Craig Liddle has said his players will be battling to reward fans for their support during a torrid Blue Square Bet Premier season.

The relegated Quakers travel to Forest Green Rovers on Saturday in their penultimate game, the second trip in a week after Tuesday's visit to Newport.

"There are supporters travelling down in similar conditions so we have to do it for them," Liddle told BBC Tees.

"I'll be demanding that we put on a display on Saturday."

Liddle's side were finally condemned to relegation after the 2-2 home draw with Bath City last weekend, their 18th game without a win in all competitions.

Their fate was accelerated by administration, leading to player departures such as Jamie Chandler, Liam Hatch and goalkeeper Sam Russell throughout the campaign.

"I'm still hugely disappointed but it's been written on the wall for ages, back as far as December time.

"The lads can relax now a little bit but a few are playing for their futures.

"Three or four have come out of retirement but five or six want to continue their career in football, and there are the young lads who want to make an impression for a new manager or a new club somewhere."