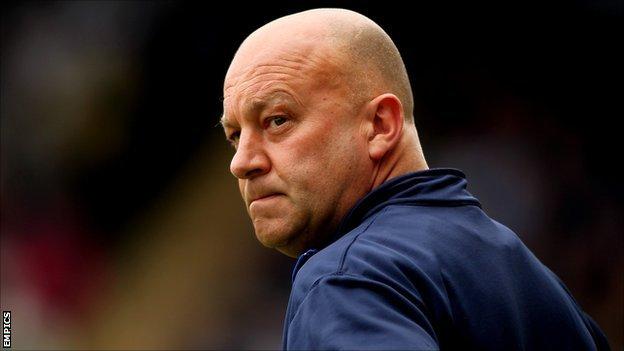 Hartlepool first-team coach Neale Cooper says his players should feel as disappointed as fans by results such as Saturday's 2-1 defeat by Chesterfield.

Pools have now won just once in their last 10 games, and scored only four goals during that spell.

"If it doesn't hurt you shouldn't play the game," Cooper told BBC Tees.

"It does hurt me, the majority of time I'm very happy, but last weekend I wasn't and the boys have a chance to rectify that this weekend."

Cooper's frustrations at a sixth home game in succession without a victory saw him criticise his side's defending as well as a continued lack of goals.

"If they've seen a different me this week, that's what I am like. I am their greatest supporter, but at times they have to feel it, and I've got to be," he said.

"It hurts me and hurts supporters, but I'm buzzing again now, and saying to the players 'show me a bit of bottle, show me something'.

"I don't want players to think it's nearly the end of the season and we're safe."

Tranmere Rovers are the opponents for Pools at Prenton Park on Saturday, who were without a midweek fixture.

I thought about the defeat, I didn't even leave the house, I sat at home watching The Voice, and on Sunday I watched a John Wayne film and was totally depressed.

"It's been a long week for myself, sometimes if there is a game on the Tuesday you can get it out of your system but we haven't had a game," added Cooper.

"Last week was sloppy, we created numerous chances, and didn't take them, while they had two shots on goal and scored two.

"I thought about it after the game, I didn't even leave the house, I sat at home watching The Voice, and on Sunday I watched a John Wayne film and was totally depressed.

"We need better collectively from the players, three draws and three losses in the last six games, we need a win at Tranmere."