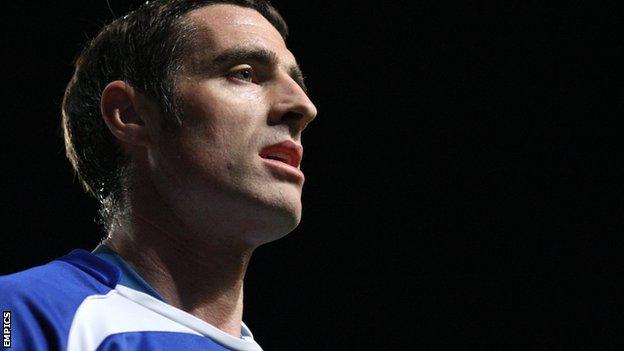 Ipswich Town defender Mark Kennedy has confirmed he will retire at the end of the season, saying it was an easy decision to make.

The 35-year-old former Republic of Ireland international, who has not played since November, will take up a coaching role at Portman Road.

"It wasn't a tough decision at all really," he told BBC Radio Suffolk.

"I have been playing football for a long time and I am keen to get into coaching," he added.

"After many discussions it was the manager Paul Jewell who made me realise that's what I want to do and I'm grateful to him for that.

"I'm really looking forward to it and I'm really excited by it."

Kennedy started his English career with Millwall - Town's opponents this weekend - and has gone on to feature for Liverpool, Manchester City and Wolves in a career that has taken in 466 league games.

He has been part of two promotions, amassed £6m in transfer fees and scored 41 goals, but rates his first of 35 caps - a 3-1 defeat by Austria in 1995 - as his career highlight.

"My debut for Ireland stands out. Even with the promotions and the moves and being in teams of the year, I think playing for your country is phenomenal," he said.

"I was a big, big fan of my country and [former Republic of Ireland international and manager] Mick McCarthy was my hero. To then go and play for Ireland and to play for Mick, I don't think you can top that."

Kennedy's retirement will leave Aaron Cresswell and Joe Whight to battle it out for the left-back berth.

Cresswell has impressed this season since signing from Tranmere in the summer, while 18-year-old academy product Whight is on the fringe of the first team.

"I'm a big fan of both of them. They're very well grounded. Cressy has had an outstanding year. The gaffer would kill me for saying it but he'd be my player of the season," said Kennedy.

"On the flip-side I want Joe Whight to be pushing him."