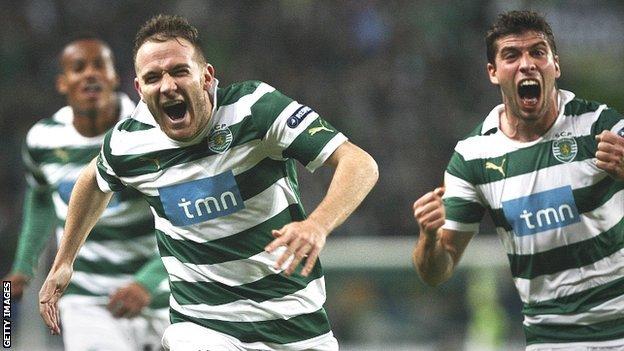 Sporting Lisbon seized the advantage in their Europa League semi-final with Athletic Bilbao after they came from behind to claim a first-leg home win.

Bilbao looked to have given themselves the edge after Jon Aurtenetxe volleyed them ahead from a free-kick.

But Sporting battled back and levelled when Emiliano Insua was allowed to steer a header in from 12 yards.

And Diego Capel fired in a superb long-range drive to give Sporting a one-goal lead to take into the second leg.

It was a remarkable turnaround for the home side, who looked to have relinquished the initiative in the tie to Bilbao by allowing Aurtenetxe space at the back post to side-foot home in the box.

Prior to that there was little to choose between the sides as neither was able to rise to the heights they have demonstrated in previous rounds.

Bilbao were particularly underwhelming - barring a 15-minute period in the second half during which they scored and struck the post through Fernando Amorebieta - as they consistently failed to produce the neat, incisive passing football that proved so destructive against Manchester United.

Some plaudits for this must go to Sporting, who were disciplined and determined to stifle the visitors and occasionally attacked with menace on the counter to just shade the first half.

All the genuine chances before the break fell to the home side, but Ricky van Wolfswinkel twice fired just wide of goal, firstly from 12 yards after a right-wing pull-back and later from range.

It was only after the opening goal that hints of the game we were promised began to emerge as both sides showed flashes of their true selves.

It was a major blow to Sporting when they fell behind but Ricardo Sa Pinto's side are no pushover at the Jose Alvalade Stadium and they extended their 100% home record under their current coach to nine games with an impressive late rally.

Insua's skilful headed equaliser was opportunistic after Bilbao had failed to clear, but Diego Capel's winner was emphatic as he cut inside before firing low past Gorka Iraizoz from distance.

With momentum behind them, the Portuguese side could have added further goals in the final 10 minutes to strengthen their grip on the tie, but they were wasteful. Substitute Andre Carrillo was particularly guilty when side-footing wide from inside the box.

Sporting coach Ricardo Sa Pinto: "We turned around the result against a big team with a great performance as we were unlucky to concede the first goal."