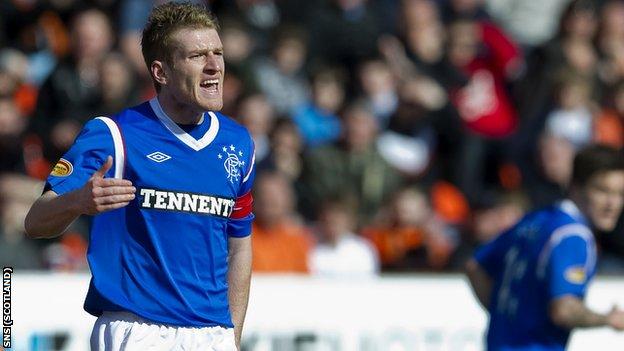 Rangers captain Steven Davis could be rested for the remainder of the season after being told he might need surgery on a groin injury.

The midfielder limped off early against St Mirren on 7 April and will miss Saturday's trip to Hearts.

"It's not been confirmed yet in terms of the extent of the injury," manager Ally McCoist told the club website.

"But it looks like he'll probably need a wee operation towards the end of the season."

The 27-year-old Northern Ireland international has been at Ibrox since 2008 and has won three championship titles during his time in Glasgow.

"Missing our remaining games is a possibility and that's a concern, but he's going to see a specialist," added McCoist.

The loss of Davis could offer an opportunity for Rhys McCabe, who received a Scotland Under-21 call-up on Tuesday after breaking into the first team last month.

McCoist said: "Rhys obviously played well in the Celtic game and we had him on again when Steven came off against St Mirren.

"We have one or two others who can play in that position, though.

"Maurice Edu has been doing all right and we have other options in there but Rhys would certainly come in to our thinking.

"He hasn't looked out of place at all, and he's a confident lad. He still has miles and miles to go, but he's had a few good games."